InstaMag
Actor #AbhishekBachchan, who will be seen in #SajidNadiadwala's much awaited #Housefull3, reveals he was nervous at being a part of this immensely successful franchise.

"I was very nervous... I had first worked with Sajid-Farhad (directors of 'Housefull 3') in 'Bol Bachchan' and they came and said they want me to do this film, then Nadiadwala came and spoke to me about this. 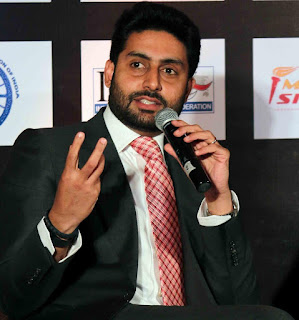 "When you are working on a franchise which so immensely successful, you don't want to let down fans of 'Housefull', so I was nervous and we all worked very hard," Abhishek told reporters at the film's trailer launch on Sunday.

"Boman Irani is my acting coach... every night he used to sit in my room and rehearse. Nadiadwala does a great job of packaging a film, it looks great. For me personally since I was the new one it was hard work but, I had a lot of fun doing this," he said.

"Housefull 3", featuring a multiple star cast including Akshay Kumar, Riteish Deshmukh, Abhishek, Jacqueline Fernandez, Nargis Fakhri, and Lisa Haydon, is releasing on June 3.
Riteish and Abhishek, who have worked together in "Bluff Master", will be seen collaborating again in "Housefull 3". About this, Riteish said: "I was waiting to work with Abhishek for a very long time... when Sajid Nadiadwala called me for this film I was really happy that I will get to work with Abhishek again."
Also present at the launch, Akshay Kumar, who is known for doing back to back films, says it is no rocket science.

Asked how he manages to do this, he said: "It is no rocket science. It is very easy... I shot for 38 days and finished shooting for 'Housefull 3'. Everybody comes on time, we work hard, it was very fast. I read somewhere about 'Mission Impossible' that the whole film was shot in 52 days.... these days we all finish shooting in 60 days and maximum it goes on for 70 days."