I support Hrithik: Sussanne on 'intimate' photo leak with Kangana

I support Hrithik: Sussanne on 'intimate' photo leak with Kangana

InstaMag
Bollywood star Hrithik Roshan's estranged wife Sussanne Khan has come forward to support him, condemning the leak of his "intimate" photograph with actress Kangana Ranaut. She says the image is "photoshopped". 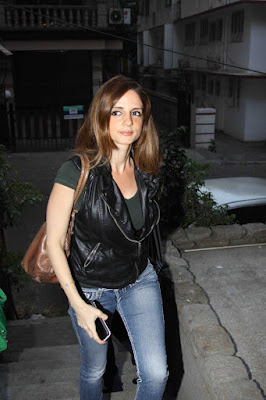 The legal battle between the two stars took another turn when an image showing Hrithik embracing Kangana surfaced online. Hrithik's legal team had also slammed the leak of his "intimate" photograph, saying it did not tell the full story.

Sussanne, who separated from Hrithik in 2013, also shared an image that seems from the same party. The photograph shows the then couple holding each other closely.

She tweeted: "Pictures are photoshopped and untrue stories carry too much weight. Another picture for the record. I support Hrithik in this".

Issues between the two actors surfaced when Kangana hinted at Hrithik being her "ex", saying in an interview that she fails to understand "why exes do silly things to get your attention".

According to sources, the photographs are from a party in which Hrithik's ex-wife Sussanne and many other common friends were also present and all were hugging each other and taking jovial group pictures.