InstaMag
Actress Juhi Chawla, who was last seen on screen in the 2015 film "Chalk n Duster", says she enjoyed working with superstars Aamir Khan and Shah Rukh Khan the most during her career.

Juhi had held a question and answer session for her fans and well-wishers on Twitter on Thursday. 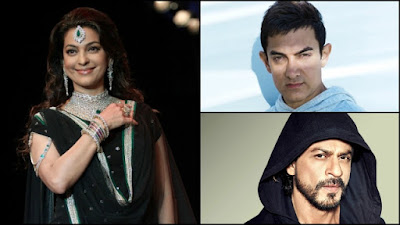 A fan asked her whom she enjoyed working with the most in cinema, to which Juhi replied: "Sharukh and Aamir".

Juhi has been a part of Hindi cinema for three decades and has shared screen space with Shah Rukh in popular films like "Darr", "Duplicate", "Ram Jaane", "Phir Bhi Dil Hai Hindustani" and "Yes Boss".

Asked by another user if she ever acts with superstar Salman Khan, what genre of film would that be, Juhi replied: "It would be a comedy".