InstaMag
With a melange of cinematic rides inspired by Hindi movies like "Zindagi Na Milegi Dobara" and "Don", thrilling attractions and live Broadway-style shows, Bollywood Parks Dubai, a first-of-its-kind theme park showcasing the true blue Bollywood experience laced with drama, action, music and dance, is poised to give tourism in Dubai a big boost when it opens its doors in October this year, officials said.

Located half an hour away from downtown Dubai, just before the Dubai-Abu Dhabi border in the United Arab Emirates, Bollywood Parks -- spread over 1.7 million sq ft -- is a part of the mega $2.6 billion-$2.7 billion Dubai Parks and Resorts project, an attempt to add to the tourism portfolio of the city.

The October launch of Bollywood Parks Dubai may see a plethora of Hindi cine stars, but no names can be confirmed yet, officials said.

Legoland and Motiongate are the other two theme parks which will open doors along with Bollywood Parks here in a total area of 25 million sq ft, but a launch date is yet to be locked for what will be the Middle East's largest integrated theme park. 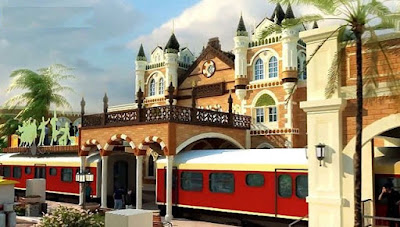 "Dubai has always been this family and leisure destination, but a theme park of this scale and size is something that has been missing," Vinit Shah, chief destination management officer, Dubai Parks and Resorts, told IANS here.

Shah, on the sidelines of a colourful press conference for a sneak peek into the theme park here on Monday, said the target audience for the destination is essentially families.

The team is confident that Bollywood fans will come and visit, but they are hopeful that "people sitting on the fence also become fans of Bollywood" after experiencing the theme park.

The interest in Hindi cinema, Shah pointed out, is "extremely high" across the Cooperation Council for the Arab States of the Gulf (GCC).

"We have about six to seven radio stations which broadcast Hindi music, and then we have TV channels which beam Hindi movies dubbed in Arabic. So, there is awareness about Bollywood," he said, stressing on how non-Indians could be equally interested in a destination of this nature.

In 2015, India became Dubai's number one source market by bringing in over 1.6 million tourists, and the country was the second fastest growing market with a 26 percent year-on-year growth, according to a report by Dubai's Department of Tourism and Commerce Marketing.
loading...
Expectations are that the numbers will keep increasing -- given how well Dubai is connected by flights to major destinations across the world.

For Bollywood Parks in general, officials are looking at a ballpark figure of 5,000 visitors a day. While for the Dubai Parks and Resorts as a whole, an annual footfall of 5.5 million guests is expected.

To this end, the Bollywood Parks team is also looking at tying up with tour operators in India to promote the property and its attractions amongst prospective tourists.

Thomas Jellum, general manager, Bollywood Parks Dubai, is confident that non-Indians will be attracted too.

Everybody will love the experience, because it is a unique, fun and entertaining offering," Jellum, a fan of "Zindagi Na Milegi Dobara", said here.

"We are also hoping that visitors will increase their stay in Dubai from three nights four days to about six days, during which they can make the most of the Park's offerings," he added. 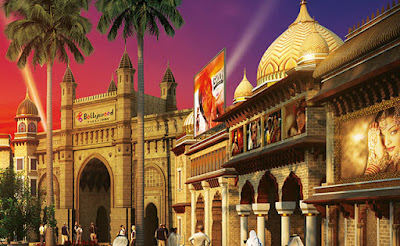 The theme park's area is spread across five zones: Bollywood Boulevard, which houses Rock On!!, a restaurant with a live band; Mumbai Chowk, which will have a 3D immersive tunnel ride called Don The Chase, inspired by Shah Rukh Khan-starrer "Don: The Chase Begins"; and Rustic Ravines, featuring entertainment options around "Lagaan", "Sholay" and "Dabangg".

There is also a “Bollywood Film Studios featuring Hall of Heroes”, where visitors can get a glimpse of the behind-the-scenes of a Hindi movie production. This will also house Ra.One Unleased, a virtual 4D multi-sensory ride; as well as Krrish Hero's Flight, a flying theatre experience recreated from the movie "Krrish".

"We have chosen some timeless films and cult classics which have all ingredients of a Bollywood film," Shah explained.

A key attraction of Bollywood Parks is its majestic Royal Plaza -- which the team describes as the "Disney castle of our theme park". This houses a 850-seater Rajmahal Theatre that will be home to a Broadway-style Bollywood-themed musical.

Over 60 performers are already working to create magic on this stage since two months in Mumbai.