InstaMag
Actress Madhuri Dixit Nene, who was one of the guests at superstar Shah Rukh Khan's dinner held for Tim Cook, says it was a "pleasure" meeting the Apple CEO.

"It was a pleasure meeting Tim Cook and the Apple team at Shah Rukh Khan's house yesterday. Loved seeing everyone!" Madhuri tweeted on Thursday. 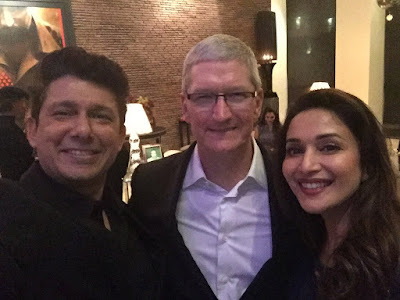 The actress also shared a photograph of herself along with husband Shriram Nene and Cook.

However, some actors like Neha Dhupia missed being at the star-studded event.

"Just happy to know that I was in the same zip code as Tim Cook... As for the rest, hopefully will get to meet (Cook) in this lifetime!" Neha tweeted on Thursday.

Held at Shah Rukh's home 'Mannat' here on Wednesday, the dinner party also was attended by Bollywood's biggest stars like Amitabh Bachchan, Aishwarya Rai Bachchan and Aamir Khan, among others.
Cook is in India on his first official visit to the country. On Wednesday, he announced that the tech giant would establish a Design and Development Accelerator facility in Bengaluru, the home of India's startup scene.