Actress Priyanka Chopra has wrapped up shooting for her international debut film "Baywatch". 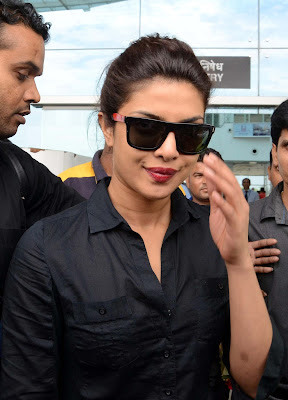 The actress on Sunday shared a photograph of herself on Instagram, where she is seen with her back to the camera.

"And it's a picture wrap on 'Baywatch'... Such a beautiful epic team on an epic film," Priyanka captioned the image, in which she is seen wearing a bright red jacket with 'Lifeguard' written across it.

The former beauty queen credited her co-stars Dwayne Johnson, Zac Efron and other cast and crew of the film in the caption.

"Lots of amazing hugs and love came my way... Much love and gratitude right back... See you soon," she added.

The "Baywatch" movie is based on the hugely popular 1990s TV series of the same name. The "Gunday" star, who will be essaying the character of Victoria Leeds in the film, also took to Instagram to share a photograph of herself along with director Seth Gordon.
It is after earning popularity with her debut international TV show "Quantico" that Priyanka landed an opportunity to feature in "Baywatch".
More from Instamag: Celebrity | Entertainment | Fashion & Lifestyle | Health & Fitness | Travel Diary | Startup