'Rangoon' to release in February 2017

The film which stars Shahid Kapoor, Kangana Ranaut and Saif Ali Khan is set in the 1940s amidst the turmoil of India’s independence struggle and will festure some epic historic references.

The film wrapped its final shoot schedule a couple of weeks back and the entire team, including Bhardwaj, producer Sajid Nadiadwala and Ajit Andhare, COO, Viacom18 Motion Pictures, are delighted with the results. 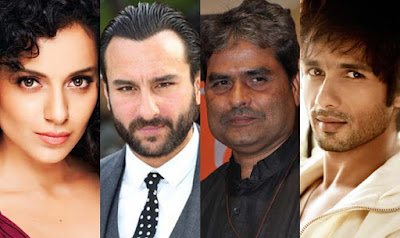 “I am very happy with what we have achieved during the shooting of Rangoon. This film is closest to my heart and I want to make sure this is seen as my best work," Bhardwaj said in a statement.

"Given that it’s Shahid’s birthday on 25th February, there is no better way to celebrate," Bhardwaj, who previously directed "Haider" added.

The "Maqbool" helmer says for him and Saif "Rangoon" is "even more" special since it has been ten years since "Omkara".
“Seeing the confidence and excitement in the team of 'Rangoon', looks like we have much to expect in early 2017," he added.