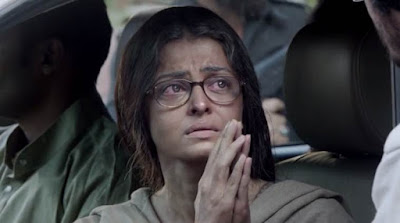 Directed by Omung Kumar, "Sarbjit" is based on the real-life story of Sarabjit Singh, who was convicted for spying and terrorism and languished in a Pakistani jail for 23 years, while his sister Dalbir Kaur, tried vigorously to release him.

The 73-year-old has called the film intense and dramatic.

“'Sarabjit' an intense dramatic film... Pertinent and performed with great aplomb! Congratulations!" Amitabh tweeted.
The film's director Omung Kumar re-tweeted Big B's comment and thanked him for making it to the movie's premiere.

"Thank you so much, sir and thank you for coming for the premiere," Kumar tweeted.

Randeep Hooda has essayed the role of Sarabjit Singh in the film.

The film is narrated through the perspective of Sarabjit's sister Dalbir Kaur, played by Aishwarya.