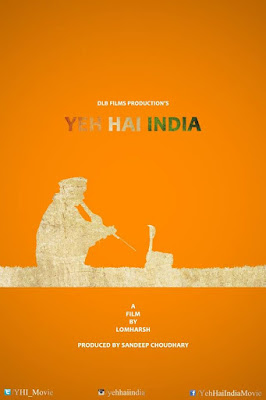 But what actually catches the eye, is that only an image of a snake charmer wooing a snake is seen on the poster. The elements are all carved out of wood, which perhaps holds some deeper meaning.

The word 'India' is in green colour and there is a hint of the colour saffron, obviously referring to the prominent colours of our national flag.

About the poster, Lom said, "We didn't want the first poster of our first film to be the one with actors, as the content of our film is way above the actors who just enact the parts. India is known as the land of snake charmers, though that does not necessarily explain what our dear country is. Modiji (Prime Minister Narendra Modi) had said that it is digital India, not a land of snake charmers.
India, being a land of snake charmers, is just something that the western countries think of us and it is a stereotype that should no longer be associated with us. 'Yeh Hai India' also addresses numerous other such stereotypes and realities of India, in an entertaining and inspiring manner."

'Yeh Hai India' intends to break the misconceptions surrounding India and aims to showcase the real India. The film, presented by DLB Productions and produced by Sandeep Choudhary, stars Gavie Chahal, Deana Uppal, Mohan Agashe and Mohan Joshi among others. The film will be releasing this year and trailer of the film will be out soon.