InstaMag
Remember how mangoes ruled the menu cards last summer? This year the king of the fruits has been dethroned by refreshing watermelons. 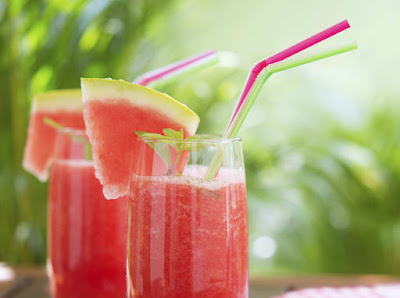 Full of health benefits and not burning a hole in your pocket, watermelons are now turning to be a preferred ingredient for restaurants and are used in salads, paired with cheese, juiced or slushed.

The fruit is also a hot favourite for the drinks menu.

"Watermelon is a seasonal fruit and has a lot of benefits. During summers it keeps you hydrated as it has a lot of water content... When it comes to preparing a drink -- watermelon is a good option as almost 90 percent of it is water. Mango on the other hand is a very traditional choice," says Ashish Singh, Corporate Chef, Cafe Delhi Heights.
The drink served here has been given a twist with celery and pomegranate along with watermelon. The drink is priced at a friendly Rs 205.

R N Rathi, owner of the Gurgaon-based 7 Degrees Brauhaus, says its refreshing taste is paired well with alcohol and desserts.

"With its cool appearance and refreshing taste, the watermelon flavour goes best with any liquor and even in the desserts. This summer watermelon would be crowned as the ruler of the menu... Watermelons are more refreshing and easy to modify and mix with other flavours. Options for making drinks with watermelon are more as compare to mangoes," Rathi.

To beat the scorching heat, these watermelon-based drinks are available between Rs 400 and Rs 450.

Vinayak Gupta, Chef and Partner, TAWAK in Noida, says watermelon has become the "flavour of season and is being widely preferred in beverages, salads, appetisers and desserts."

Then there is CIRCUS, a South Delhi restaurant that's serving watermelon-based cocktails and mocktails priced between Rs 150 and Rs 400.

"Watermelon gives the unique freshness and sweetness to the drink. It easily mixes with any liquour like Vodka, Rum, Gin, Tequila," Tarun Tanwar, mixologist and beverage manager at CIRCUS.

Barbeque Nation Hospitality Ltd is serving a watermelon based mocktail mixed with cinnamon, strawberry and chat masala aptly. It's aptly named Misalaydar Tarbooz at Rs 95 plus taxes. They are also serving a rum-based watermelon cocktail at just Rs 175 plus taxes.

"It can be eaten in many ways. You can skewer it on kebabs, make a salsa, toss it in salads, whiz it to make soup, or juice it for a refreshing mocktail or cocktail," Khan added.

"Unlike watermelons, mangoes are highly priced and are available only in summers. Hence, the availabilty and health benefits of watermelon have made it the popular choice this season," says Rajat Chandna, executive sous chef, The Suryaa New Delhi.

There are many restaraunts and hotels, like Nando's, The Embassy, Londoners Bistro & Pub, Radisson Blu, which have special watermelon-based dishes and drinks for beating the scorching summer heat.

Vidit Gupta, Owner of Connaught Place's Cafe Dalal Street, which stirs up summer sangria cocktail at Rs 345 plus taxes, explained: "Since most people are getting conscious about healthy eating, I think that's the primary reason for watermelon taking over as the summer fruit over mangoes... Not to forget most girls also get acne with consumption of mangoes, plus watermelon is cheaper on the pocket in comparison to mangoes."

Junglee Billee, an eatery in Greater Kailash area of South Delhi, is serving innovative and mouth-watering watermelon-based delicacies such as Watermelon Feta and Argula salad; and chilled watermelon-mint soup.

"The versatility of the ingredient allows its incorporation not only in soups, salads and desserts but has given a new twist on various dips, sides, main courses, marination and cocktails. The availability of water melon being perennial allows chefs to innovate and experiment in more avenues in comparison to the mango," Pawan Bisht, Head Chef, Junglee Billee.

The Gurgaon-based Sandys Cocktails and Kitchen holds the top spot for watermelon-based food and drinks in their menu cards.

"Nothing beats the freshness of watermelon and mint...Watermelon tops the list popularity-wise among the drinks. We have a martini with fresh watermelon and mint juice... It never fails to surprise me with a round-the-year demand and is among the top selling drinks," said Sandy Verma, Owner, Sandys Cocktails and Kitchen.