Kangana, Rajamouli honoured with 'Indian of the Year' award

InstaMag
"Baahubali: The Beginning" director S.S. Rajamouli and National Award winning actress Kangana on Thursday were felicitated with the CNN-News18 'Indian of the Year' 2015 award by Finance Minister Arun Jaitley for their contribution to the field of cinema.

Rajamouli won the 'Indian of the Year' award for the major success of "Baahubali: The Beginning", which grossed over Rs 600 crore at the box office last year. 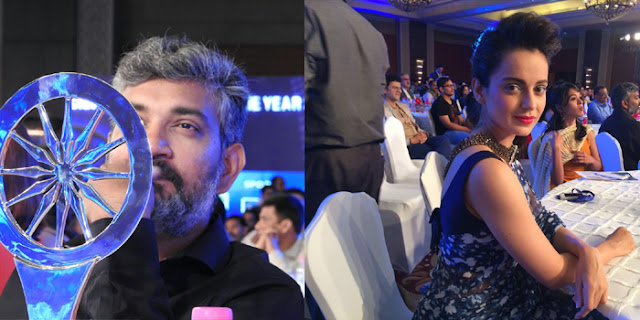 "I am a man who lives with cameras and lights but I am very nervous to be in front of them. The award would have been more complete if it would have been given to team 'Baahubali' as the film is about team effort. We had a fantastic cast and crew. Without them it wouldn't have been possible," Rajamouli said on stage.
Kangana, who has won three National Awards for her versatile acting in films like "Fashion", "Queen" and "Tanu Weds Manu Returns", was given the Special Achievement award for "breaking the glass ceiling in a predominantly male-driven industry."

"I am feeling really happy. I know these words sometimes sound very shallow and cliched at these (awards) event because they are so commonly used. But for me at this juncture of my life, it really means a lot," Kangana said.

"These events and sort of thoughtful honours make one's life seem like a good screenplay and make you believe in the concept of magic which I feel is very important for artists to believe in," she added.

Actor Ranveer Singh was also given a Special Achievement award for his roles in "Dil Dhadakne Do" and "Bajirao Mastani". Ranveer did not attend the function.

Apart from them, various other personalities from different fields including Sania Mirza, Leander Paes from sports; Bandhan Financial Services in business; and the people of Chennai, who tackled the floods in their state, in public service category, were awarded with different awards.