InstaMag
In grand celebrations to mark her 90th birthday, Queen Elizabeth II sported a daring neon green outfit as she greeted the public, impossible to miss in her horse and open carriage, even past the thousands of viewers and hundreds of marching officers. 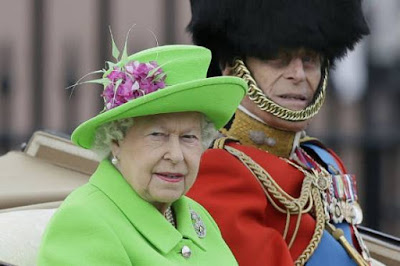 Celebrations began with the traditional Trooping the Colour, a spectacular display of more than 1,400 officers and men in their famous red jackets and black bearskin hats, with 200 horses and more than 400 musicians.

The whole royal family -- including young Prince George and Princess Charlotte -- joined the nation's longest-serving monarch on the balcony of Buckingham Palace for a wave to the people and an exhilarating flypast.

Princess Charlotte also made her first public appearance with the rest of the royal family, joining older brother Prince George and the Duke and Duchess of Cambridge.

The 13-month-old tot looked adorable in a pale pink dress with a matching bow pinning back her hair as the whole family -- including Prince Harry, Prince Charles, Duchess Camilla, the Duke of York and his daughters Princesses Beatrice and Eugenie -- greeted the gathered crowds from the Buckingham Palace balcony

Hurricane and Spitfire aircraft used in the 1940s Battle of Britain took part in the flypast, capped off with the air force's famous Red Arrows flying with red, white and blue smoke in the trail.

In her younger years, the Queen would ride side-saddle on horseback to greet the public.

Her choice of colour for Saturday's outfit triggered a social media storm, with Twitter users celebrating the monarch's fashion sensibilities with "neon at 90".
loading...
The Queen's real birthday is on April 21, but official celebrations always take place on June 10, and often for a whole weekend.

Before the festivities, a new photograph of the Queen and the Duke of Edinburgh, who turned 95 on Friday, was released to commemorate their joint birthdays.

The pair attended a thanksgiving service at St. Paul's Cathedral in London on Friday, where they were joined by other members of the royal family and politicians, past and present.