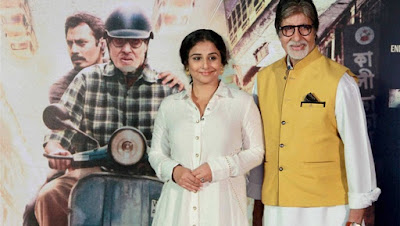 Set in Kolkata, "TE3N" is an astutely mounted, suspense filled, investigative drama. It is the closure of a kidnapping case that occurred eight years ago.

Ever since John Biswas (Amitabh Bachchan) loses his eight-year-old granddaughter Angela Roy in a tragic kidnapping incident, he has been depressed and guilt ridden, for he is blamed for a crime he has no hand in. He visits the Lal Bazar police station daily, to meet the officer Sarita Sarkar (Vidya Balan), seeking an update and thus hoping for a closure.
With the case not making any headway, John also hounds the then investigative officer Martin Das (Nawazuddin Siddiqui), who has now left the police force and become a priest.

Once, while in the market, John stumbles upon a little girl wearing a cap, which Angela had worn when she was kidnapped. This sets John on the search trail once again and ignites his hope for justice.

But it is only when another child, Ronnie, is kidnapped and a similar sequence of events that happened during Angela's case follow, that the investigating officer Sarita reopens old case files and seeks Martin's help and intervention.

How the trio investigates the case and solves the mystery, forms the crux of the tale.

The riveting plot and brilliant performances are what keep you hooked.

Amitabh, with his awkward gait and open mouth, makes a remarkable effort to keep John Biswas distinct and different from his "Piku" character, which too was of a Bengali septuagenarian. He is convincing and shines as the distraught grandfather.

Nawazuddin is effortlessly natural and gets into the character of Martin Das. Vidya, credited for a guest appearance, offers nothing exceptional. Sabyasachi Chakraborty as Manohar Sinha, Ronnie's grandfather, is perfunctory, despite his strong screen presence. Prakash Belawadi as Manohar's colleague is wasted. Padmavati Rao in the wheel-chair, as John's wife Nancy, holds her own against Amitabh, in a miniscule role.

Adapted from the 2013 released Korean film, "Montage", director Ribhu Dasgupta's direction is fraught with flaws especially in his script.

The characters are underdeveloped and wafer thin, especially that of the kidnapper. His motivation is totally unconvincing. Similarly, Nawazuddin's character too seems flimsy. His getting involved in the case after becoming a priest is a tad too far-fetched.

Also the screenplay, with the timelines overlapping, is a bit confusing.

Visually, the setting is realistically natural and moody and is captured brilliantly by cinematographer Tushar Kanti Ray's lens. There are a few manually focussed frames, which may seem artistic, but in actuality, blemish the viewing experience.

The background score by Clinton Cejero merges well with the visuals and adds pace to the narrative.

Overall, this leniently-paced suspense film which starts off with a swelling promise seems to have been wrapped with hurried compromises that doesn’t really leave a strong impact -- except for the performances.