InstaMag
Actor #AbhayDeol says that his #HappyBhagJayegi co-star #DianaPenty is a natural comic, but she is not quite aware of it. 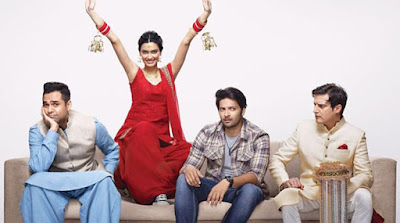 "Comedy is all about timing." I think comedy is such that if it's there in you and if you're automatically comical, then it comes very naturally.

"In that sense, comedy is very easy if you're a natural comic. But if you're not, then it can be tougher than drama," Abhay said here at an event.

Praising Diana, he said: "The good thing with Diana is that she doesn't think much... She just reacts. So I think she is a natural comic, but she is not aware of it. And that was fun.
"If I would do something, she would respond accordingly. That's very important in comedy... That your actors also get each other."

On her part, Diana, who made her Bollywood foray with "Cocktail", said: "Comedy is really very difficult and I'm not a natural. But I think it also has to do with the way it's scripted.

"I give full credit to Mudassar (director Mudassar Aziz) because he really nailed the script in terms of the dialogues and the comic timing. And you have a cast where you put all these boys together... So it automatically just becomes funny. So I didn't have that much to do."

Diana said it was the first time that she met Abhay thanks to the movie.

"I have always been a fan of the kind of work he does, the content-driven kind of films he chooses. I think he is a very selfless actor because he will do whatever it takes for the other actor to get their scene right, which a lot of other people don't do," she added.

The movie releases on August 19.