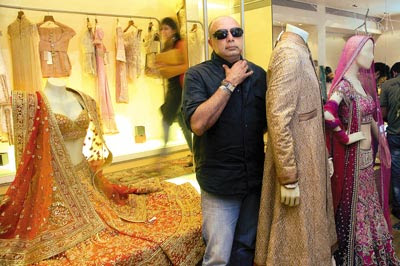 Best known for his ability to infuse Indian craftsmanship and textile heritage with European tailored silhouette, Tahiliani believes that the Indian fashion industry has become more strategised and cemented over the last 20 years.

“India's propensity to consume is gaining an international audience and this is changing the competitive landscape,” Tahiliani told.

“It has certainly become more organised and a little more professional, and obviously the market has exploded, but I think that we still have a long way to go in terms of being more business oriented and there’s still room to get more organised and professional,” the designer added.
Eulogizing the new and younger crop of designers, Tahiliani, who has over two decades of experience in the industry, believes that they are doing well in terms of the handloom and textile industry.

“What’s really heartening to see is that there are so many younger designers who are going places and are doing so well in terms of the handloom and textile industry... it has become more organised. I think handloom was very localised in terms of weavers with a certain look from a certain area sold through certain channels,” said the Co-Founder of Ensemble -- a multi-designer boutique.

“There has been a lot more creative freedom and other regions are experimenting with textile alien to their region, especially if they are more lucrative. As long as people appreciate traditional craftsmanship and embroideries, machine work will never replace the richness of hand embroidery,” he added.

Asked if the plus-size models are yet to move into the mainstream industry in India?

“Well, they should have moved into the mainstream long back. But are not normally associated with very expensive high fashion and couture,” Tahiliani said.

Having draped most of the leading ladies of Bollywood like Priyanka Chopra, Aishwarya Rai Bachchan and Madhuri Dixit-Nene in his creations, Tahiliani says that fashion is his muse, not a Bollywood star.

“Art, architecture, interiors, history, travel and maharajas... My inspiration comes from many things. Sometimes it’s from beautiful inlay work that I’ve seen in a fabulous monument; other times my inspiration can be something as simple as a beautiful kanjeevaram weave,” he said.
loading...
“Ultimately, however, my inspiration comes from India’s rich traditions of craftsmanship, particularly when it comes to things like embroideries that we have in India. Nothing is more amazing than beautifully executed, intricate and fine technique. I don’t design clothes keeping a Bollywood star in mind, but rather for the new age contemporary woman,” he added.

Tahiliani is all geared up to showcase his collection The Last Dance of the Courtesan at the #FDCI India Couture Week 2016 on Thursday here. He has artistically blended fabrics like cotton jacquards, cotton silks, crepes and cutwork jamdanis with Swarovski crystals for the range.

That's not all. He will next participate in the Vogue Wedding Show and then the prestigious #LakmeFashionWeek, to be held in Mumbai in August.

"I will present my Ready to Wear Autumn Winter 16-17 collection at Lakme Fashion Week. It has been inspired by the works of Mrinalini Mukherjee (late sculptor) and the journey only gets bigger and better from here," he said.