Mahasweta's last glance was all about life: Film-maker Joshy Joseph

When filmmaker #JoshyJoseph met his #MahaswetaDidi at the Intensive Care Unit of a Kolkata hospital a few days back, the eminent writer's eyes conveyed life, not death. 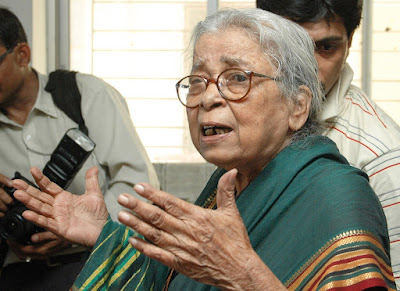 "Didi was conscious and we spoke through eyes. Her eyes were all about life. And I want to keep that memory of her glance forever," Joseph, who has made three movies on Mahasweta Devi, told.

As the country mourns the passing away of Mahasweta Devi, one of the literary stalwarts of her generation, it's a personal loss for Joseph, who shares a 12-year long relationship with "Didi". Joseph, a four-time National Award winner spoke over phone from Kolkata on Thursday.
Of his three movies, the last one, "Serendipity Cinema" ran into controversy as the Central Board of Film Certification (CBFC) blocked its release for mis-pronouncing Mahasweta Devi's name in his Malayalam accent.

"Didi ridiculed the CBFC in a statement from hospital. That was her last public statement," says the film maker.

The bond between the duo goes back to 2005, when his earlier film "One Day from a Hangman's Life" was stopped from screening at Kolkata by then Chief Minister Buddhadeb Bhattacharjee.

The film was about a day in the life of Nata Mullick, the hangman who executed rape-and-murder convict Dhananjoy Chatterjee.

"When most of the Left intellectuals kept silent, it was Mahasweta Devi who came out in my support," remembers Joseph.

After watching the DVD of the movie, the author asked him to meet her. "As I entered her flat, she kissed my forehead; and it was the beginning of a long association," said the filmmaker.

From then on, Joseph travelled with the author and took part in many struggles, including Nandigram.

The Magsaysay Award winner, known for her fight for the tribals and marginalised community, kept the struggle throughout her life.

"During Nandigram, we lived in a small house, which was converted into a primary health centre by some doctors who used to treat the injured," he said.

The first movie #JourneyingwithMahaswetaDevi, which was shot extensively during their trips, captures many candid moments from the Jnanpith awardee's life and struggle.

"Once, when we were coming back from Nandigram, suddenly she said I cannot say that I discovered you. It's like one rascal discovering another," said the film-maker.

Recalling her activism, Joseph says that whether it was Nandigram, Odisha or Manipur, Mahasweta Devi was an active presence from the front.

"When Irom Sharmila entered in the 10th year of her fast in Manipur, we went to meet her. But the government never allowed her to meet Sharmila. Later they spoke over phone," he said.

Joseph, who hails from Kerala, says the Padma Vibhushan awardee had a special connection with Kerala.

"Didi had visited Kerala many times and was actively involved in many issues," he said, adding that the author's itinerary was always packed with activities.

"Didi was one of the rare writers whose image grows bigger and better as one goes closer," he summed up.