InstaMag
Veteran actor Naseeruddin Shah, along with ace filmmakers Ketan Mehta, Jahnu Barua and Sudhir Mishra, on Friday inaugurated the 7th Jagran Film Festival, which, aiming at showcasing films of "cinematic brilliance" from around the world, will travel to 16 cities aross India and will screen over 400 films. 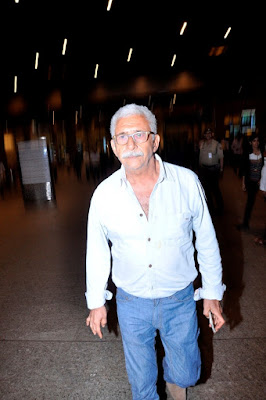 Also present at the inaugural ceremony were composer Sandesh Shandilya, film editor Ballu Saluja and cinematographer Avinash Arun among others.

Featuring Pankaj Kapur and Vinay Pathak in the lead, "Toba Tek Singh is based on late author Saadat Hassan Manto's short story of the same name. "Chotay Shah", on other hand, stars Pakistani actors Adnan Jaffar and Maira Khan in the lead.

Some of the films from different countries across the world that will be screened this year include "Monsoon Wedding" (US), "Zoe" (Spain), "Oedipus King" (Argentina), "Utopia, An Adult's Fairy Tale" (Greece), "Hear The Silence" (Germany) and "The Surprise (Italy) among others.

About the criteria for films selected this year, Manoj Srivastava, Strategic Consult of Jagran Film Festival, told IANS: "The criteria was cinematic brilliance of the films. The film must have something that impresses you visually. We didn't necessarily go for big films. We just tried selecting good films.

"Overall in about 100 days we witnessed one lakh footfalls last year. The constant objective of this festival is to promote appreciation of the cinematic art in the cities where bigger international film festivals cannot reach."

After its Delhi leg, which will conclude on July 5, the festival will travel to different cities like Kanpur, Lucknow, Allahabad, Varansi, Agra, Meerut, Dehradun, Hisar, Ludhiana, Patna, Ranchi, Jamshedpur, Raipur, Indore, and Bhopal. The final leg of the festival will take place in Mumbai.