InstaMag
Reality TV star #KimKardashian says her daughter #North is still struggling to cope with being a big sister to Saint West. 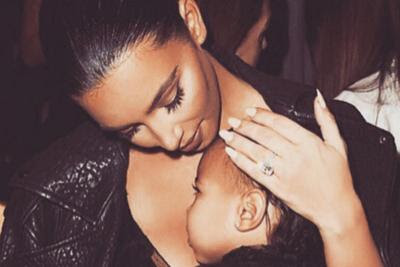 Kim and her husband #KanyeWest welcomed son Saint into the world in December last year. She says their three-year-old daughter North is taking her time accepting she has to share everything with him, reports femalefirst.co.uk.
“We talk about North being a big sister all all the time. Right now, because she's three, it's time to talk a lot about sharing. And North is great at sharing.
“She's still getting the concept of having a brother, though. Like, Penelope and Reign are her cousins, but Saint is here every day because Saint is her brother,” Kim, whose sister Kourtney has three children, Mason, six, Penelope, four, and 19-month-old Reign, told Elle.com.
Kim further said that she is working on the bond between her two children as she wants them to be close.
“I like to bring her in to say 'Good morning'. She still wants things to be all about her, because she's three! But planting that seed every morning that the day starts with you and your brother, that's how I've been doing it,” Kim said.
“And she's getting so much better. I can't wait until they can really start communicating - although once he's big enough to start grabbing her toys, we'll have to get involved in a different way,” she added.
More from Instamag: Celebrity | Entertainment | Fashion & Lifestyle | Health & Fitness | Travel Diary | Startup
To stay updated, please connect with us on Facebook, Twitter and Pinterest.
Visit our yet another website on Food recipe and health tips (largest collection of Indian and International recipe) - Imperial Inn!
Celebrity