InstaMag
South Indian superstar #Rajinikant's latest blockbuster #Kabali has gripped #Bengaluru as no other movie ahead of its mega release on Friday in about 80 theatres and multiplexes here. 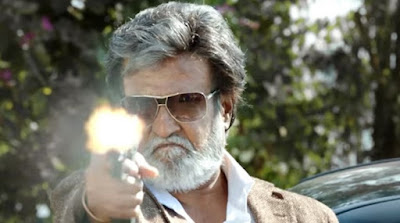 Though the Tamil magnum opus is dubbed in Hindi and Telugu but not in Kannada, the native language of the city and state, tickets were sold out for all shows till Sunday within 48 hours after advance booking opened on Monday.

As Rajinikath's frenzied fans are eager to watch the movie on first-day, first-show, hundreds of them, who didn't get the tickets till Sunday, flocked to cinema halls on Thursday but left disappointed as they were told to come on early Friday.
"I have decided to go the theatre (Urvashi) on Friday at 6 a.m. to stand in the queue though ticket counters will open at 9 a.m. for seats in front rows at lower fares for the first show at 11 a.m.," Ravi Kiran, 19, a die-hard 'thalaivar Rajini' fan told IANS here.

Many fans have garlanded posters and banners carrying their matinee idol photo, with "Kabali da!" a catch-phrase from the movie, which means "I am Kabali".

Rajinikant, 65, has close connection with Bengaluru, as he spent his early years in the city.

Born to Maharashtrian parents, Rajinikanth's original name is Shivaji Rao Gaekwad. He worked as a bus conductor in the state-owned Bangalore Transport Service in the late 1960s and early 1970s when he began acting in plays.

In 1973, he went to Chennai and joined the Madras Film Institute for a diploma in acting.

Rajinikanth's elder brother Sathyanarayana Rao Gaekwad still lives in the same house where he stayed at Hanumanthnagar in the city's southern suburb.
loading...
According to neighbours, whenever Rajinikanth visits Bengaluru, he goes to the house to meet his brother and other family members. He also catches up with some of his old friends in the city.

Plans to screen the mega film in a few five-star hotels in the city from Friday to Sunday were aborted after Bangalore Deputy Commissioner V. Shankar declined permission, as hotels do not come under the purview of the Karnataka Cinema (Regulation) Act.

The Karnataka State Film Exhibitors' Association and the Karnataka Film Chamber of Commerce had opposed the screening of the movie in star hotels as it was against the provisions of the Act.

"We had planned to screen the film at four star hotels - JW Marriot Lalit Ashok, Royal Orchid and Crown Plaza in the city, with tickets prized from Rs.1,300-1,500," said Lahari Velu, a distributor of the movie.

About 15,000 people booked tickets to watch the film in the star hotels, as tickets for the movie in theatres and multiplexes were unavailable.

Taking cue from Chennai where some companies have declared holiday on Friday for their employees to watch the movie, a start-up firm in the city has given 'off' to all its 40 techies.

With regular holiday on Saturday and Sunday, many employees in IT and biotech firms applied for leave on Friday to watch "Kabali" on the first day itself.

In a related development, the state-run postal department has decided to release a special carrier cover to mark the special aircraft that will fly fans from here to Chennai on Friday to watch the movie.

Budget carrier Air Asia has tied up with the Karnataka postal circle and Chennai postal region for the initiative to fly about 2,000 registered letters in the aircraft to Chennai along with fans.

"The carrier covers will bear the postmarks of the Bangalore and Chennai airport post offices and flown back on the return flights by evening," said general post office assistant superintendant Thimmoji Rao.