'Sex Chat with Pappu & Papa' to be out in 15 languages

'Sex Chat with Pappu & Papa' to be out in 15 languages

InstaMag
#SexChatwithPappu&Papa, a fiction web series which seeks to delve into hitherto taboo subjects like #condoms and #homosexuality, will be launched in 15 languages. 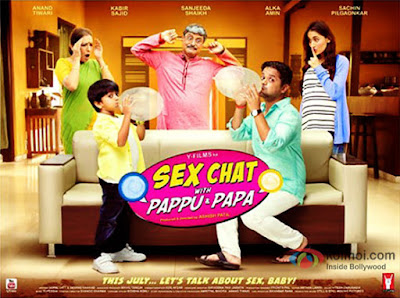 #YFilms, the youth wing of #YashRajFilms, has come up with the five-part fictional series which will deliver information across different themes related to sex and sexuality.

The film will be dubbed in six Indian languages Hindi, Tamil, Telugu, Kannada, Malayalam and Bengali, and also subtitled in 10 international languages, including English, Chinese, French, Dutch, Spanish, German, Bahasa, Malay and Thai, to begin with to get this important message out to as many people as possible, read a statement.
Starring Anand Tiwari, Kabir Sajid, Sanjeeda Shaikh, Alka Amin and veteran Sachin Pilgaonkar, the series marks the directorial debut of Ashish Patil, who heads Y-Films. It is written by Gopal Datt and Devang Kakkad with story supervision by Amritpal Bindra and Anand Tiwari.

Patil said: "Most parents clam up when having to talk to kids about the 'birds and the bees'. Research clearly shows that sex talk with parents is directly linked to safer sexual behaviour.

"We're here to help get this important chat started -- in 15 languages -- after all. Hence, we're also delighted to have partners like Durex on board help us get this message out to as many people as possible globally."

"Sex Chat with Pappu & Papa" tells the story of the Watsa family. It will feature a curious seven-year-old boy Pappu, who asks the most outrageous questions of his Papa, Anand, who attempts to answer them to the best of his ability -- initially with a lot of awkwardness and eventually with a lot of fun and simple anecdotes.

The series is presented by condom brand Durex. The content has been heavily researched and ratified by some of the foremost medical experts, top hormonal, gynecological doctors of the country.