Ace designer #RituBeri, who is trying to give #Khadi a makeover so it sets foot in the global scenario, says a #KhadiDay will be celebrated soon as a homage to Mahatma Gandhi's contribution to the "signature fabric of India". 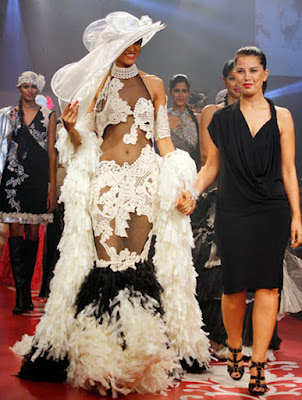 It wasn't long ago that some of the Indians flaunted their best handloom pieces and shared their photographs supporting the #IWearHandloom campaign online. Will there be a similar campaign or a National Khadi Day?

"The Khadi Day is going to be announced soon as a homage towards Mahatma Gandhi's contributions to the fabric," Beri told here.

Excited about it, but don't have anything made of Khadi?

Get your hands on some of the pieces from Beri's latest collection. The Khadi and Village Industries Commission (KVIC) recently launched the Exclusive Ritu Beri's Khadi Collection here.

"Khadi is the oldest and a traditional form of handspun fabric of India. The endeavour is to try to give Khadi a makeover to set its foot in the global scenario and to introduce state-of-the art designs and styles in garments made in Khadi," she said.
Her new collection consists of Indo-Western silhouettes and reflects the Indian charm with a modern flavour. The silhouettes are a mix of our rich tradition with a contemporary look. The collection is an eclectic blend of ghagras, salwars, jackets and tops.

Was is it a deliberate decision to launch it a few days prior to Independence Day?

"Yes, we had planned to launch it around this date. It would be ideal for people to wear and promote Khadi on this special day for their country as appealed by our Prime Minister Narendra Modi to have at least one Khadi garment in their wardrobe," said the advisor for Khadi promotion.

She has more plans to make the fabric a wardrobe staple.

"We plan to do lots of activities and take various initiatives including fashion shows showcasing khadi creations. We plan to do shows for kids and adults in Khadi. We will be doing impressive promotions and exhibitions related to Khadi," shared the internationally known designer.

Beri, who has an experience of 25 years in designing clothes for international and national celebrities including Nicole Kidman, Madhuri Dixit-Nene and Katrina Kaif, believes Khadi is a powerful pre-independence fabric of India.

"I believe Khadi is the signature fabric of India. It is the oldest handspun fabric which has been widely used for generations in India. The endeavour is to encourage national and international fashion designers to create their collections using Khadi. We need to be proud of this fabric and create an exclusivity that is so well deserved," she said.

Beri has also been roped in to design a new uniform for Indian Railways' staff. How is that shaping up?

"For now, we are researching on various possibilities and trying to see what best fabric would work given the climatic conditions. We are making uniforms and bags for various institutions. There is a lot in the pipeline."