#Khadi Originals from #ethnicwear fashion brand #IndusDiva will retail a range of trendy ethnic and fusion apparel, including work wear and dresses online, on #Myntra. 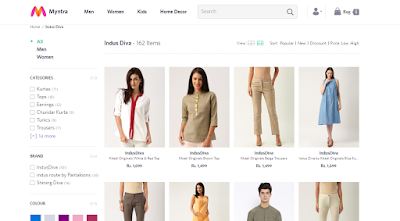 This will be done in association with Haresh C Shah from Mumbai Khadi Village Industries Association (MKVIA), read a statement.

Khadi Originals is a mix of earthy elegance, minimalistic chic and subtle sophistication. Crafted for men and women with discerning tastes, the silhouettes are simple, easy and comfortable in hues that vary from earthy and monochromes to pastels. Inspired by nature, these unique creations make for all-season clothing.

Khadi Originals will be available on Myntra at an average price point of Rs 1,699, with over 200 product options in this season.
“Younger generations of Indians are losing touch with ethnic wear for various reasons. From being perceived as ‘old fashioned' to being considered as ‘not-so-wearable', Indian ethnic wear is only a traditional garment for many youngsters who see saris and dhotis neatly stacked in their parents' wardrobes," said Vineet Saxena, Co-founder and CEO, IndusDiva.

"IndusDiva endeavours to change this. We want to make Indian ethnic wear trendy, wearable and something you should be proud of wearing as a modern Indian,” Saxena added.

"We need to look beyond the ‘neta' tag given to Khadi. A fabric that has roots in rebellion can once again bring about a silent but sure revolution, enabling a refreshingly fashionable identity-expression,” said Jyoti Amba, Chief Product Officer and Co-founder, IndusDiva.

For Myntra, the introduction of Khadi Originals is a "revolutionary new concept", according to Gunjan Soni, Chief Marketing Officer and Head, International Brands Business of the online platform.