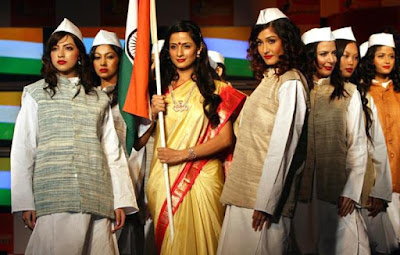 "When I started doing fashion designing 25 years ago, my first collection was in Khadi. The sales were good. I am honoured to do it again. It is for India and we need to do this for our country. Like they say, it's an air conditioner fabric and it's handspun. It gives employment to so many Indians. Khadi is a national fabric," Beri said at the launch.
Lekhi agreed with her and also emphasised on the need to "designing Khadi according to youngsters' choices. It shouldn't be just clothes for the politicians, but should be fashionable among youngsters as well".

The new collection surely has something for men and women -- young and old alike. It's a blend of ghagras, salwars, tops and jackets with kurtas in shades of pink, blue, yellow and white.

Should an ambassador be appointed to promote Khadi?

"Our PM Narendra Modi has been attached to Khadi for long. He has been popularising it across the globe. So, why do we need an ambassador?," said Mishra.

And Beri added that she would love to design something for Modi.

"It's a dream to dress up Modi. He's a real leader. To design for him, will be an honour," said the designer, whose creations have been flaunted by stars like Nicole Kidman, Katrina Kaif and Akshay Kumar.

The event was also attended by actor Anshuman Jha.

Dressed in blue denims, the "Yeh Hai Bakrapur" actor told IANS: "I love Khadi. It is a very comfortable especially when it is hot. I am not known for my fashion sense much, but I believe kurtas in Khadi would help me in some way."