InstaMag
Information and Broadcasting Minister #MVenkaiahNaidu on Wednesday unveiled the poster of the first #BRICSFilmFestival to be held here. 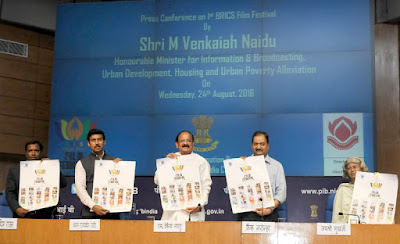 The festival, which is a part of the special events planned in run-up to the 8th BRICS Summit being held in India, will take place at Siri Fort Auditorium Complex from September 2-6.

The poster was unveiled in the presence of Union Minister of State for Information and Broadcasting Rajyavardhan Singh Rathore and Directorate of Film Festivals Senthil Rajan, among others.

"India is preparing to host the 8th BRICS Summit, during its chairmanship which is scheduled to take place on October 15-16 in Goa. The theme of India's BRICS chairmanship is building responsive, inclusive and collective solutions,” Naidu said at the poster launch at the National Media Centre here.
“The festival will be a platform for people of the film industry of member countries to provide them an opportunity to explore areas of cooperation which can be leveraged through this economic grouping," he said.

“In addition to this, the festival will be an opportunity for cultural exchange through cinema, culture and cuisine. The main focus of the BRICS Film Festival is to celebrate the excellence of cinema by rewarding film makers, actors, producers and directors,” Naidu added.

The festival -- which is an initiative announced by Prime Minister Narendra Modi in the last BRICS summit, held in Russia -- has a competition section in which 20 films will be screened.

The movies will focus on a variety of issues and themes ranging from discrimination, love, history and relevant social challenges being faced by BRICS countries Brazil, Russia, India, China and South Africa.

The jury of the festival will include one member from each country. These include journalist, producer and curator of film shows Francis Vogner do Reis from Brazil, Academic Secretary of the National Academy of Motion Pictures Arts and Sciences of Russia Kirill Razlogov, professor Hou Keming from Beijing Film Academy, China, member of the British Academy of Film and Television Arts (BAFTA) Xoliswa Sithole from South Africa, and Indian writer, director and actor T.S. Nagabharana.

The films that will be competing from India include magnum opus “Baahubali: The Beginning”, Bengali film “Cinemawala”, Kannada film “Thithi” and Bollywood film “Bajirao Mastani”.

The closing ceremony of the festival will focus on the journey of Indian cinema and a cultural performance from China, the host for the next edition of the film festival.

The closing film of the festival will be Chinese star Jackie Chan's “Skiptrace”.