Nearly 70 nations are working in #Russia in the area of innovation and scientific cooperation and it is important for the country to attract international investors in this sector, Russian Prime Minister #DmitryMedvedev said on Tuesday. 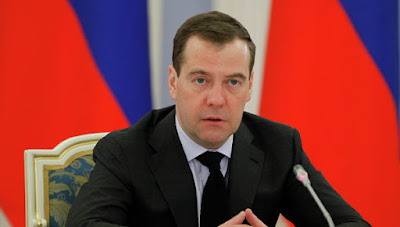 "Between 60 to 70 countries are working in Russia in the area of innovation and scientific cooperation. It is important for countries, be it China, Brazil, the US, Saudi Arabia, Russia, or others, to communicate and jointly work on challenges in the field of innovation," Medvedev said in his address at the opening ceremony here of a global conference under the auspices of the International Association of Science Parks and Areas of Innovation (IASP).

The Spain-headquartered IASP is the largest worldwide network of science parks and areas of innovation, uniting technology parks, business incubators and institutions, and it has a Special Consultative Status with the United Nations Economic and Social Council (ECOSOC).
"We see the leaders of the global innovative community gathered here. A science park is actually a number of related services and these communications are getting increasingly international," Medvedev said.

"Knowledge is required from different disciplines, not every startup has the capacity to acquire on their own all these various essential knowledge," he added.

The Russian capital is hosting the four-day 33rd annual IASP Conference for the first time, following its selection as the venue after a global competition.

Over 1,500 participants from around 70 countries are participating, including technopark representatives from Russia, the US, Spain, Britain, Brazil, South Korea, China, Sweden, among others.

The theme of IASP 2016 is "The Global Mind: Linking Innovation Communities for Internationalization, Sustainability and Growth". The IASP's mandate is to contribute to global economic development through innovation, entrepreneurship, and the transfer of knowledge and technology.

Russia's biggest innovation fund, the Skolkovo Foundation, is the local organiser of the conference here.

Falling global prices of oil that is a major Russian resource, has made it imperative for the government to accelerate the country's transformation from a resource-intensive to an innovation-based economy.

The Russian economy is deep into a recession with the GDP in decline for the sixth consecutive quarter.

It is also estimated that the $72 million National Wealth Fund, built up when oil prices were high, could be depleted in 2017-2019.

Created in 2010 by the Russian government, the Skolkovo Foundation runs the Skolkovo City here which houses an innovation centre comprising over 1,500 companies and start-ups, a Technopark and a new university established in collaboration with the Massachusetts Institute of Technology.

"The cumulative revenue of Skolkovo's start-ups through January 2016 reached $1.6 billion. They brought in more than $350 million in investment, creating 18,000 jobs and filing over 1,900 patent applications along the way," Skolkovo said in a release here.

IASP President Jean-Francois Balducci told IANS on the sidelines of the event, that they were bringing the conference to Moscow for the first time because of Russia's reputation as a leader in the field of science and technology and the fact that these disciplines are flourishing in Russia.

"Science parks and innovative development zones are growing rapidly in Russia. We are a global network and Internationalism is a philosophy with us," he said.

Asked about the recent trends in reverse globalisation as seen in Britain voting to leave the EU, Balducci said: "Things like Brexit should encourage us scientists to be more proactive in countering such trends. IASP doesn't believe in such trends. Progress is only possible if innovation is shared."