Actor #ArjunKapoor, who is busy with "Half Girlfriend", says he had his own "Dilwale Dulhania Le Jayenge" moment on the upcoming film's set. 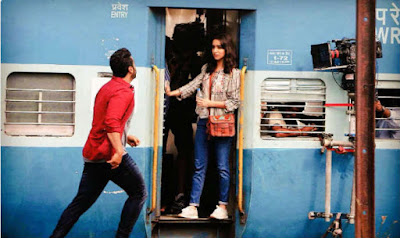 Arjun on Wednesday night shared a photograph of himself with his co-star Shraddha Kapoor. In the image, Shraddha is seen standing on the edge of a moving train, while Arjun is seen running alongside the train.

The photograph reminds of the iconic train scene of the 1995 film "Dilwale Dulhania Le Jayenge", in which superstar Shah Rukh Khan is seen standing on a train extending his arm for actress Kajol, who is seen running alongside the train on the platform.
Co-produced by Chetan Bhagat, "Half Girlfriend" is an adaptation of the author's eponymous novel.

This will be the second time Arjun will be seen in Bhagat's book adaptation. In 2014, the 31-year-old star was seen in the film "2 States" an adaptation of the book "2 States: The Story of My Marriage".

Directed by Mohit Suri, "Half Girlfriend" is locked for release on May 19 next year.