Our visual experiences are not be linked to our understanding of numbers, a study, led by an Indian-origin researcher, of people born blind has revealed. 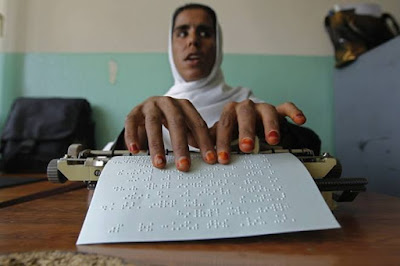 The study showed that the visual cortex -- the part of the brain that receives and processes sensory nerve impulses from the eyes -- in blind people is highly involved in numerical reasoning, suggesting that the brain is vastly more adaptable than previously believed.

"The number network in brain develops totally independently of visual experience. Blind people have never seen anything in their lives, but they have the same number network as people who can see," said lead author Shipra Kanjlia, a graduate student at Johns Hopkins University in Maryland, US.
Further, the visual cortex -- also known as the visual area -- involved in doing maths is similar in both blind as well as sighted people, the study said.

This visual cortex is extremely plastic and, when it isn't processing sight, can respond to everything from spoken language to math problems.

"The brain as a whole could be extremely adaptable, almost like a computer that -- depending on data coming in -- could reconfigure to handle almost limitless types of tasks," explained another researcher Marina Bedny, assistant professor at Johns Hopkins University.

It could someday be possible to re-route functions from a damaged area to a new spot in the brain, she said. "If we can make the visual cortex do math, then we can make any part of the brain do anything," Bedny stated.

For the study, the team involved congenitally blind people and sighted people wearing blindfolds to solve math equations and answer language questions while having a brain scan.

With the math problems, participants heard pairs of increasingly complicated recorded equations and responded if the value for "x" was the same or different.

The participants also heard pairs of sentences and responded if the meaning of the sentences was the same or different.

With both blind and sighted participants, the key brain network involved in numerical reasoning, the intraparietal sulcus, responded robustly as participants considered the math problems.

Meanwhile, in blind participants only, regions of the visual cortex also responded as they did math. And the visual cortex did not merely respond, the more complicated the math, the greater the activity was in the vision centre.

In addition, the study demonstrated that this re-purposed vision centre in blind people was not just responding to new functions haphazardly. But, the region has become specialised and segmented by function, like any other part of the brain.

While some parts of the cortex are doing math, other parts are doing language, etc.

Even in a resting state, brain scans show these new brain regions connect to traditional parts of the brain responsible for math and language in sighted people, the researchers concluded.

The findings were published online in the journal Proceedings of the National Academy of Sciences.