Actor Brad Pitt is reportedly being investigated for child abuse. 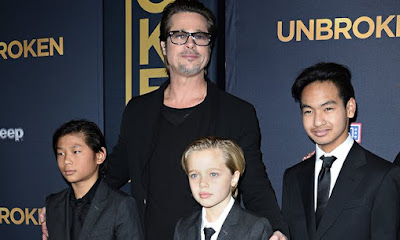 The "By The Sea" actor allegedly verbally and physically abused one of his children while he was drunk on a private jet last week, an incident which led his wife Angelina Jolie to file for divorce, reports tmz.com.

However, according to a source, Pitt "takes the matter very seriously and says he did not commit any abuse of his children. It's unfortunate that people involved are continuing to present him in the worst possible light".
The Los Angeles Police Department is working with the Los Angeles county Department of Children and Family Services to investigate the claims that Pitt screamed at one of his children.

It is alleged that when the plane landed, the 52-year-old continued to shout before trying to leave the airport in a fuel truck.

Pitt and Jolie are said to have been interviewed by officers and there are plans for the Department of Children and Family Services to interview their six children, Maddox, 15, Pax, 12, Zahara, 11, Shiloh, 10, and twins Knox and Vivienne, 8.

It was previously claimed that there was a specific "incident" in the week before Jolie called off her marriage which led to her decision to end their relationship.

"The final divorce decision was only made one week ago. An incident took place and prompted Angelina to act and file," a source said earlier.

On Monday, Jolie filed for divorce from the actor, citing irreconcilable differences.

The couple had been together since 2005.