#SohaAliKhan, whose mother #SharmilaTagore was once chief of the Central Board of Film Certification #CBFC, says the censorship body needs to stop treating the audience as children. The actress, whose film #31stOctober struggled for clearance, says artistes are all for certification over censorship. 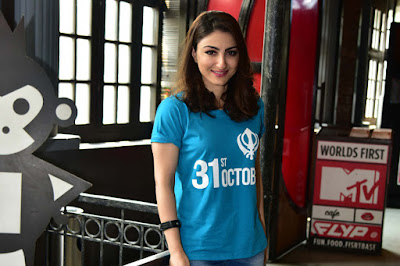 "31st October" is based on the aftermath of Indira Gandhi's assassination and its repercussions. Considering the sensitive topic, the makers had to face a lot of trouble with the CBFC.

How frustrating was it?

"It was very frustrating, of course. As artistes, we don't believe in censorship. We believe in certification and I feel sometimes they cut too much," Soha told reporters at a press conference here.

"They treat the audience as children... It is very frustrating," the 37-year-old said.
She says she felt more frustrated for the film's writer-producer Harry Sachdeva as "31st October" is "the one film he has, which he is pushing".

"He chose a diplomatic route because this film is important for him. He didn't want to be aggressive about it... He slowly convinced the censor board," she added.

Soha said the censors first asked for 40 cuts in the movie, and then the cuts were scaled to none.

On his part, Sachdeva said that there shouldn't be any interference with creativity.