How depression is linked to diabetes during pregnancy

Depression in early pregnancy more than doubles the risk of gestational diabetes, which, in turn, increases risk of postpartum depression six weeks after giving birth, says a study. 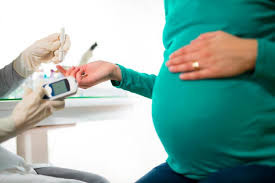 Gestational diabetes is a form of diabetes occurring only in pregnancy and, if untreated, may cause serious health problems for mother and infant.

The researchers analysed pregnancy records from the NICHD Fetal Growth Studies-Singleton Cohort, which tracked the progress of thousands of pregnancies, to understand the patterns of fetal growth.

The women responded to questionnaires on symptoms of depression when they enrolled in the study, again between the 16th and 22nd week of pregnancy, and then six weeks after giving birth.

The researchers found that women who had the highest scores for depression in the first and second trimesters -- about 17 percent -- had nearly triple the risk for gestational diabetes when compared to women who had lower depression scores.

The researchers believe that high blood sugar levels may lead to inflammation, hormonal, and other changes that could lead to symptoms of depression.