Actress #EmilyBlunt says there's a huge societal pressure women face on whether or not they become mothers and the choices they do make if they do become parents. 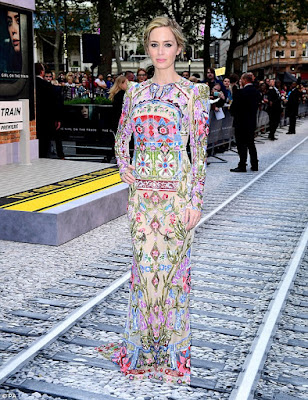 In her new film "The Girl on the Train", the 33-year-old stars as Rachel Watson, a recent divorcee and alcoholic who becomes obsessed with the seemingly perfect couple she sees everyday when she passes their home, while riding the train.

As the story of the film tackles aspects of motherhood, Blunt has opened up on how she sees motherhood, reports hollywoodreporter.com.

Speaking at the movie's world premiere here on Tuesday night, Blunt said: "There is a huge societal pressure on women when it comes to motherhood, and these 'mommy cults' that go on.

"It makes women feel that they have to be a bit defensive about the choices they make - whether they want to be a mother or whether they don't, whether they want to breastfeed or whether they don't. I could go on and on."
Blunt further went on and said: "In the domestic world, I think it's when women can be a bit cruel about each other, more so than any other environment. And I think this film really captures that... I think women will really relate to the film and see aspects of themselves, or themselves fully, in any one of these characters."