Unknown
Researchers have discovered a mechanism that strongly influences whether or not someone is likely to drink a lot of #alcohol.

Alcohol can reduce firing of neurons or brain circuits, which is why it reduces anxiety and social inhibitions, and those who are less sensitive to motor-impairing effects of alcohol are likely to drink much, the researchers said.

"If you're sensitive to the motor-impairing effects of alcohol, you don't tend to drink much. If you're not sensitive, you drink more," said one of the researchers, David Rossi, Assistant Professor of Neuroscience at the Washington State University.

The mechanism offers a new target for drug therapies that can curb excessive drinking, said the study published in the Journal of Neuroscience.
It may be particularly effective among problem drinkers, half of whom are believed to have a genetically determined tendency to abuse alcohol. 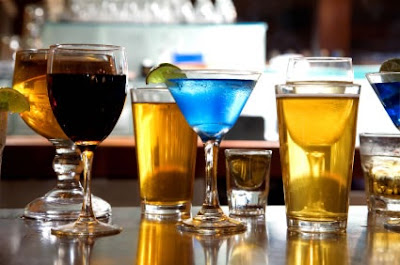 The mechanism is found in the cerebellum, a part of the brain at the back of vertebrate skulls, in small neurons called granule cells.

Sitting on the cells are proteins called GABAA receptors that act like traffic cops for electrical signals in the nervous system.

When activated, the GABAA receptor suppresses the firing of neurons, or brain circuits.

But alcohol does not act the same on every brain.

To find out what makes some drink more than others, the researchers conducted an experiment in two specially bred mice.

The D2 mouse is a cheap drunk. After the equivalent of one or two drinks, it has trouble staying on a rotating cylinder.

The B6 mouse, however, will stay on a rotating cylinder even after drinking three times as much alcohol, "which is beyond the drunk driving limit," Rossi said.

When the researchers injected a drug called THIP into the cerebellum of B6 mice, it activated the GABAA receptor, recreating the effect that alcohol had on low drinking D2 mice.

It ended up deterring the B6 mice from drinking.

The finding, said Rossi, highlights a new region and new targets that can be manipulated "to deter excessive alcohol consumption, and potentially with fewer side effects than other existing targets and brain circuits."