Amidst all negative criticism for Bollywood actress #KatrinaKaif for winning the 'Smita Patil Memorial Award', ace actress #JuhiChawla on Tuesday stood by her, saying the 'Baar Baar Dekho' star deserves an award. 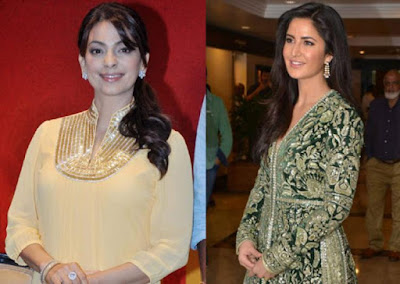 Both the actresses graced the Priyadarshni Academy's 32nd Anniversary Global Awards function in Mumbai on Monday.

While Katrina received the 'Smita Patil Memorial Award' for her outstanding contribution in Bollywood, Juhi was the recipient of the 'Priyadarshni Academy's 32nd Anniversary Global Awards'.

"I think our memory is very short. Just a few years ago, I remember Katrina Kaif was in a row. She had about 10 super-duper hit films to her credit. I think she deserves an award. She is very beautiful and a committed actress," the 48-year-old actress told the media.
Earlier, another talented actor Swara Bhaskar also lauded Katrina for winning the award.

Hitting back at the critics, the 'Nil Battey Sannata' actress wrote in her column: "Whether or not Katrina Kaif is a good actor notwithstanding, there is no denying that she is a hugely hard-working, disciplined and diligent person. It reflects in her work."

"Any artist of any field will tell you that hard work is something to be respected," she added.

Katrina, 33, who has worked in well-received films like "New York", "Ajab Prem Ki Ghazab Kahani", "Raajneeti", "Zindagi Na Milegi Dobara" and "Dhoom 3", ensured that she will keep her sincerity towards her work intact.

"I believe the most important thing in art is truth. And I promise my attempt to be truthful and sincere to the craft which has largely given me the purpose of my life over the last 15 years."

"The one thing I do hope is that I continue to entertain the audience who have given me so much love and support. I hope I can make them proud of me," she said while addressing the media at the event.

On the work front, the "Namastey London" actress is filming for Anurag Basu's comedy-mystery film "Jagga Jasoos" with Ranbir Kapoor.

Katrina has also confirmed to reprise the role of "Zoya" in Ali Abbas Zafar's "Tiger Zinda Hai", the sequel of the 2012 film "Ek Tha Tiger" opposite Salman Khan.