Khadi is the fabric of the future: Designer Bibi Russell

Bangladeshi designer #BibiRussell, who works closely with Indian artisans for her fashion creations, foresees a bright future for #khadi -- a fabric that Mahatma Gandhi used as a symbol of protest against the British Raj -- provided it is "contextualised" and is in sync with current tastes.

"Khadi is the fabric of the future. It keeps you warm in winter and cool in summer, it uses hand and human resources from step one till finish. What it needs is contextualisation in modern times," Russell told in an e-mail interview from Dhaka.

The designer is excited about showcasing her latest collection at the seventh edition of India Runway Week September 16-18 and said khadi would be the focus of the range.

"The collection that I will be showing is 100 percent khadi and 100 percent Rajasthani. Rajasthan is a goldmine for all sorts of culture and art. It is also the largest producer of woollen khadi or 'ooni' khadi as they call it," she added.
What about jute that is found in abundance in Bangladesh? 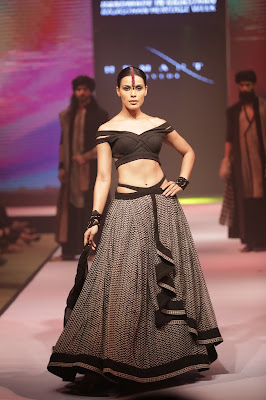 "Jute is the pride of our nation. (Nobel laureate Rabindranath) Tagore's Amar Shona Bangla, meaning Our Golden Bengal, has been adapted as our national anthem and has been inspired by jute, which turns golden when ripened. Because of the use of nylon and polyfibres, jute and other natural fibres took a hit. We are still the leading exporters of jute.

"And, gladly, there is a general awareness spreading in the population, through the youth, which is proving the undeniable superiority of natural fabrics."

Popular for her flamboyant personality, and quirky, bohemian fashion style, Russell is also a former international model who worked for different magazines including Vogue, Cosmopolitan and Harper's Bazaar. Her modelling stint also saw her take part in fashion shows when she worked with names like Yves Saint Laurent, Kenzo, Karl Lagerfeld and Giorgio Armani until 1994.

What made her leave modelling and pursue a career in fashion designing?

"The modelling industry gave me a lot of exposure, experience and understanding of fashion, culture and art of countries around the world, and I would not replace that time of my life with anything else. When I returned home, to Bangladesh, though, I saw the poverty that had struck my nation and was too touched to go back and work on anything else," she said.

The designer said she finds a "certain beauty in poverty and it is the people". "I love my craftspeople, and craftspeople around the world. This is my dream, that was a bonus," she added.

Russell says "fashion for development is an accurate description" for her work and adds that her inspiration comes from the craftspeople.

"All my outfits are beautifully handmade by skilled craftspeople. My work shows joy in a positive way, in which I see craftspeople... That is why all my inspiration comes from the craftspeople and I salute them," said the designer, who was born in Chittagong, Bangladesh.