Now an anthem for M.S. Dhoni

Giving an ode to the journey of Indian ODI captain #MahendraSinghDhoni, makers of "MS Dhoni: The Untold Story", a forthcoming biopic on the cricket star, released a single called #HargullymeinDhonihai on Wednesday. 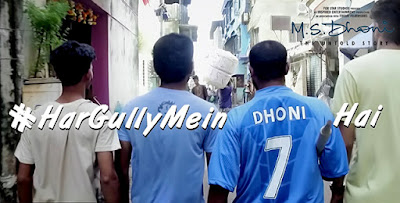 The anthem, which is a tribute to all those who dare to dream big, has powerful yet simple lyrics and is composed by Rochak Kohli.

Its video captures India in all its splendour and energy as they engage in one of its favourite pastimes - playing cricket absolutely anywhere. The anthem has been widely shot across 104 locations spanning 16 Indian cities in totality, read a statement.

Fox Star Studios released the song here in the presence of director Neeraj Pandey and lead actor Sushant Singh Rajput, read a statement.
Talking about the song, Shikha Kapur, Chief Marketing Officer, Fox Star Studios, said: "'Har gully mein Dhoni hai' is a song that celebrates the dreamers in all of us - the ones who have the courage to dream.

"This song is a metaphor for everyone in India who has the potential to rise above their immediate realities to achieve them. It is an emotional song that connects to everyone, in every bylane of the country, with the hope and passion to succeed."

Based on the life of Dhoni, the film depicts the untold journey of a young boy who went on to become a famous cricketer. "M.S. Dhoni: The Untold Story" is slated to release on September 30.