Playing Dhoni special for me: Sushant

Actor #SushantSinghRajput, who portrays Indian ODI captain #MahendraSinghDhoni in his upcoming biopic "M.S. Dhoni: The Untold Story", says playing the cricketer was special for him. 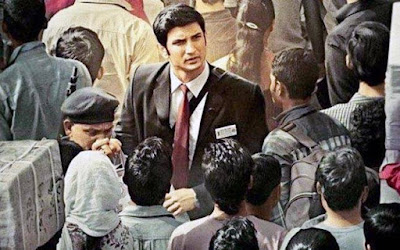 Dhoni has joined Sushant for Kingfisher Premium's "Original Social Network" campaign. The two are seen together in a TV commercial for the same.

"It was great to share screen space with Dhoni in my latest ad for Kingfisher. It's a first for any brand to have us both together in an advertisement," Sushant said in a statement.

"While in the movie I play him, which was really special for me as an actor, we also came together to celebrate this very special moment when we were shooting for the commercial," he added.

The commercial celebrates success, friendship and the real spirit of "good times".

"This is my fourth TV commercial with Kingfisher, which reinforces the positioning of Kingfisher as the ‘Original Social Network'. I couldn't think of a better way to celebrate our camaraderie than to come together on-screen with the legend," Sushant said.

Directed by Neeraj Pandey, "M.S. Dhoni: The Untold Story" is slated to release on September 30.