Bollywood actress #PriyankaChopra, who has found global popularity with American TV show "Quantico", looked ravishing in a Jason Wu red chiffon dress as she twirled confidently and gestured 'namaste' on the red carpet at the 68th #EmmyAwards. 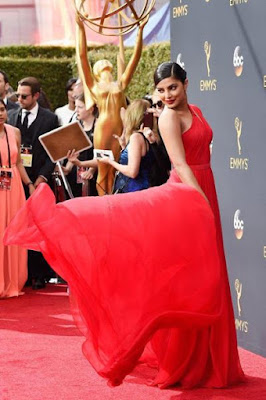 She proudly shared the stage with actor Tom Hiddleston to give away the Outstanding Directing for a Limited Series, Movie, or Dramatic Special award to "The Night Manager director" Susanne Bier.

Before her red carpet appearance, the former Miss World gave her fans a sneak peek into her trailing one-shoulder red gown.

On the red carpet, she exuded confidence as she flashed her million dollar smile accentuated by her bright red lip colour, twirled, posed and folded her hands to gesture 'namaste'. Even on the stage, she made a perfect twirl.

She sported a minimalistic look with accessories limited to a diamond ring and diamond earrings.

After cementing her space in Bollywood, Priyanka launched international singles. She followed it up by bagging the lead role as Alex Parrish in "Quantico", now set to enter its second season.

She also has a role in the big screen version of widely watched TV show "Baywatch".