Raj Kapoor was welcomed in Russia without visa: Rishi Kapoor

Sharing insights about the stardom of #RajKapoor across the world, his son and veteran actor #RishiKapoor on Friday said that once the late legendary actor-filmmaker was welcomed in Russia without visa when he was in talks with a Russian circus troupe for his blockbuster film #MeraNaamJoker in the mid-1960s. 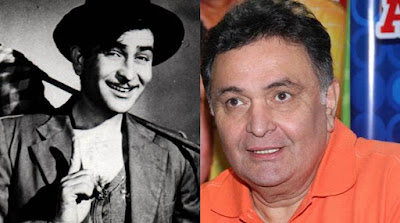 Rishi was in the national capital to attend the opening ceremony of the 1st BRICS Film Festival, where he was felicitated by Union Minister of State for Information and Broadcasting Rajyavardhan Singh Rathod and Minister of State for External Affairs Gen. V.K. Singh for his and the Kapoor family's contribution to the field of cinema.

While receiving the honour, Rishi got nostalgic and recalled a few of his late father's fruitful memories.
"Raj Kapoor was making 'Mera Naam Joker' and I think it was in the mid-1960s when he was negotiating with a Russian circus to be part of the film. He was in London and certainly he had to be in Moscow, Russia -- which was then Soviet Union," Rishi said, adding that Raj Kapoor landed in Moscow thinking he had the visa.

"But he didn't have visa to come into Moscow. Still they welcomed Raj Kapoor... There was no welcome committee for him because he landed unannounced. So he got outside and waited for a taxi... By then people started recognising that Raj Kapoor is in Moscow. His taxi came and he sat in. Suddenly what he saw was that the taxi is not moving forward and instead is going up. The people took the car on their shoulders," Rishi said.

Sharing another anecdote of Raj Kapoor's life, Rishi said: "Much later in mid-1980s, we didn't really have great ties with China. So China requested the Indian government that they want Raj Kapoor to travel there."

"When the ministry spoke to Raj Kapoor, he got excited like a young boy. He was very fond of Chinese food. He told my mother, Krishna Kapoor, that I am going to China and you are coming with me."

However, he added, that Raj Kapoor didn't go to China.

Rishi shared: "After five or 10 days, he became a little glum. He said to my mother that, 'No, I will not go to China'. When she asked why, he said that the people of China have watched that Raj Kapoor of the 1950s -- the young and handsome guy."

"Today I have become old and become fat, so I don't want to break their heart with this look. He never went to China afterwards," Rishi added.

The 1st BRICS (Brazil, Russia, India, China, South Africa) Film Festival, which is part of the special events planned in the run-up to the 8th BRICS Summit to be held in India, kick-started here at Siri Fort Auditorium Complex with the screening of National Award-winning filmmaker Jayaraj's multilingual film "Veeram".

The festival will end on September 6 with the screening of Jackie Chan's "Skiptrace".