Sanjeev Kapoor wants Aamir to play him in biopic

Celebrity chef #SanjeevKapoor wants Bollywood superstar #AamirKhan to play him in his biopic. 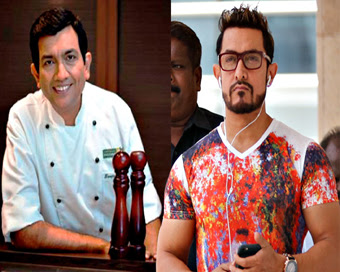 Kapoor was asked about his biopic at the launch of the festive collection of Max Fashion.

He said: "A biopic on me is in talks. However, I feel I need to work more. I still have to achieve many things in life."

Who would best portray him on the big screen?

"There are so many good actors in Bollywood and anyone can portray my character. However, I wish my good friend and a very good actor Aamir Khan to play my character in the biopic," said Kapoor.
Actress Bhumi Pednekar, who was also present at the event, said though she can't cook well, she loves Kapoor's recipes.

Kapoor is a popular name in Indian households and stars in the TV show "Khana Khazana" -- the longest running show of its kind in Asia broadcast in 120 countries.

The chef had launched his own channel "Food Food" in January 2011. He has received many awards including the Best Executive Chef of India Award and the Mercury Gold Award in Geneva, Switzerland.