Rapper #Azealia_Banks has accused actor #Russell_Crowe of physically abusing her, and also claimed that he had allegedly passed a racist remark. 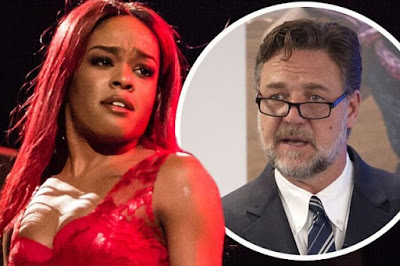 "To recap my night, I went to a party at Russell Crowe's suite, at which he called me a n****r, choked me, threw me out and spat at me," Banks wrote on Facebook on Sunday, reports dailymail.co.uk.

"Last night was one of the hardest nights of sleep I've had in a long time. The men in the room allowed it to happen. I feel terrible today," she added.
However, she deleted the post soon afterwards as other claims emerged telling a very different story.

According to a source, eyewitnesses at the party claimed Banks was the aggressor and Crowe was forced to carry the rapper out of his room during a private party due to her becoming violent.

The eyewitnesses claim Banks made a bizarre statement directed toward Crowe about slashing his throat and that of another guest with her wine glass. Banks then allegedly, according to sources, cocked her glass back and Crowe intervened.

The incident is said to have occurred on Saturday night at Crowe's hotel room at the Beverly Hills Hotel.