The mission of cleanliness cannot succeed solely with action to resolve immediate problems, it has to be bolstered with a change in our deep-seated sanitation habits and practices: this is the key message of a week-long campaign that the #IGNCA has taken up to support the national #Swachh_Bharat_Abhiyan. 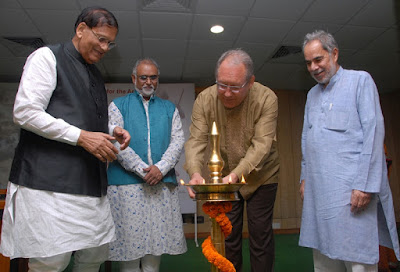 “Action is temporary, culture should change,” said Dr. Bindeshwar Pathak, renowned social worker and Founder of the Sulabh Sanitation & Social Reform Movement at the inauguration of the ‘Swachh Srishti’ campaign at the IGNCA on Saturday.

The programme, which marks the birth anniversary of Mahatma Gandhi and the second year of the launch of the Swachh Bharat Abhiyan, will host an exhibition, talks by experts including Padma Shri awardee Shri Arunachalam Muruganantham, and a painting contest for schoolchildren.


Speaking at the inaugural ceremony, Shri Ram Bahadur Rai, President IGNCA, recalled the emphasis that Gaandhiji placed on cleanliness and sanitation and his efforts to educate the public about it.

Dr. Sachchidanand Joshi, Member Secretary IGNCA, primary objective of the Swachh Srishti campaign was to focus on how the concept of ‘Swachhta’ is embedded in our daily lives how lasting changes to some of our daily routines can help achieve the important mission. 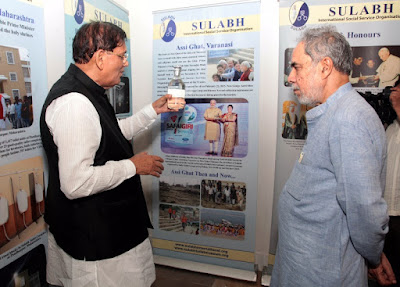 As part of the Swachh Bharat Abhiyan, the Indian government is targeting the end of the practice of open defecation by 2019.

Sulabh International, which has been carrying out pioneering work in the area of sanitation is organizing the exhibition at IGNCA on the significance of health and hygiene in contemporary times. It will be open to visitors from 10 am to 6 pm.

Dr Pathak noted that cultural shifts may not be as difficult to achieve, since archaeological evidence shows that early Indians of the Mohenjodaro and Harappa periods in history had clean and organized cities with good sewage systems. This changed after caste divisions formed in society and communities engaged in sanitation work were relegated to the bottom of the social hierarchy.

He said one of prime focuses his organization set up in 1970 was to release and rehabilitate the scavengers engaged in the demeaning practice of carrying human waste on their head.

Sulabh has constructed about 1.5 million household toilets; 8,500 community, public toilets and 16,000 school toilets in different parts of the country.

Students from different schools in the NCR region who are part of the Sulabh Sanitation Club are actively participating in the Swachh Srishti programme. There are 174 such clubs all over India and more than 5000 club members actively assisting in school sanitation like menstrual hygiene, general cleanliness & personal hygiene. These clubs help maintain machines that manufacture and dispense sanitary napkins and destroy used napkins.

Menstrual hygiene is also the subject of a talk that the IGNCA will host on Monday (October 3) by Shri Muruganantham, social entrepreneur andinventor of the low-cost sanitary pad making mini-machine, which has additionally helped provide livelihoods to many rural women.
In a separate lecture on Wednesday, October 5, Dr Ram Autar will share the ideas of ‘Swacchta’ as described in ancient literature.
A painting competition for school students is scheduled for October 4 on the theme of cleanliness. There will also be a two-day cartoon workshop on October 6th & 7th by Raipur-based artist Shri Triambak Sharma, and a fashion show by students of the Sulabh Sanitation Club.

The exhibition has stalls by Swachhta workers, volunteers of NaiDisha (Alwar-Tonk), Sulabh Mahila evam Bal Vikas Samiti, Hirmathla (Mewat) and by the Widows of Vrindavan. A stall showing AVs & CDs prepared by Sulabh on cleanliness and sanitation is also up. Publications on sanitation and related subjects are being displayed as well as distributed.