The setting for Gauri Shinde's second film "Dear Zindagi" is Goa. The teaser opens magnificently to the sound of waves and seagulls. Before superstar #Shah_Rukh_Khan or his endearing co-star #Alia_Bhatt make an appearance, one can hear his voice. 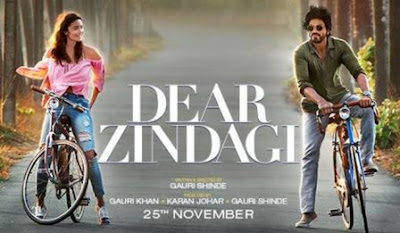 He is saying that his father will bring him to the beach to play 'kabaddi' with waves.

SRK then proceeds to show Alia how. Her embarrassment, amazement, surprise and delight are contagious. The sequence is vintage Goan nostalgia -- mixing the odour of memory with the magical pleasure of the moment when the present company seems as perfect as it can get.

Shah Rukh looks very happy in Alia's company.
Perhaps it is the company he is seen keeping in the brief but irradiant trailer that lights up the screen for less than a minute leaving film buffs craving for more.

The feeling of a life worth living comes through in the second scene of the trailer when we see Shah Rukh and Alia cycling together. She declares in her girlish excitement that she wants to be free. And speeds ahead of her companion, only to tumble at the roadside.

He doesn't laugh. He sniggers. And refuses to pick her up. Maybe he wants her to learn to be self-sufficient. Or maybe he's just being playful.

Shah Rukh seems to be the older man who has seen the vivacity of youth not too long ago. And their relationship? It is definitely not that of a conventional couple. Nor do they seem to share a mentor-pupil equation.

This is something deep and wholesome.

Shah Rukh after a dull innings with his last two films seems bright, alert and romantic. As for Alia, she is again going to prove herself an underage performing miracle.

Incidentally, there are two Gauris in the credit titles -- director Gauri Shinde and producer Gauri Khan.

And yes, Shah Ruh continues to keep his gallant promise. The heroine's name comes before his in the billing.