Indian actress #Priyanka_Chopra says she loves to shoot in New York, adding the energy of the city is amazing. 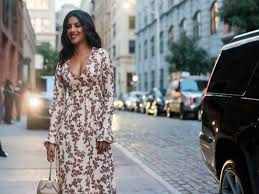 The actress is busy shooting for the second season of American TV show "Quantico" here. She also thanked city Mayor Bill de Blasio for helping the team of the show shoot in the US city.

"First and foremost, I want to thank the mayor and his office for helping bring this show to New York, we know about your contribution and are really grateful," Priyanka said in a statement.

The "Bajirao Mastani" actress added: "Second of all, it's New York city, it's the center of the universe and for me, you know what is best about it is that I can fly back to India on a direct flight. So I love shooting in this city, the energy is amazing, I have a beautiful house on the east side, Thank you Mayor."
Priyanka, who was seen essaying an FBI agent named Alex Parrish in the first season of the American drama series, is now portraying a CIA agent in its second season, which airs in India on Star World and Star World HD.

The actress expressed her views in an interview - conducted by YouTuber Mandy T.T. Carr - at the Paley Fest held earlier this week.