#Irrfan_Khan is seen doing some hardcore action scenes, shows streaks of being the bad guy and then flaunts a discerning smile in the special India trailer of forthcoming #Hollywood_film #Inferno, which maintains the mystery element around his character. 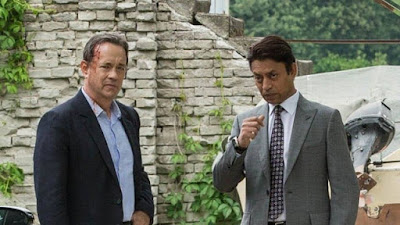 The special trailer was launched on Tuesday here in the presence of Irrfan, and the actor quipped that the film can now be called "Irrfano" instead of "Inferno".

The trailer is packed with action, suspense, mystery and thrill as the visuals are used to sketch a brief about Irrfan's character, and leaves the audience with more unanswered questions.

In the Sony Pictures Entertainment's film, Tom Hanks will be seen reprising the role of Robert Langdon, a professor of symbology at Harvard University. Irrfan is playing Harry "The Provost" Sims, head of The Consortium, in the movie.
The film will present a trail of clues tied to the great Dante himself. When Langdon wakes up in an Italian hospital with amnesia, he teams up with Sienna Brooks (played by Felicity Jones), a doctor he hopes will help him recover his memories. They race across Europe and against the clock to foil a deadly global plot, and Irrfan joins their mission to save the world.

The special trailer opens with Hanks laying out the plot of the film which also touches upon overpopulation issue. And Irrfan makes his first appearance with dialogue -- "Where is professor Langdon now?"

There are also cues that Irrfan, who has made a name for himself in India as well as West, might just be the bad guy in the film. As Irrfan's dialogue of asking someone to remove Langdon might come as a blow to the people rooting for the actor's character in the film.

However, the trailer leaves one guessing as to what's the actual intention of Irrfan's character.

The film is releasing in India on October 14 -- two weeks before it opens in the US.

Irrfan is excited over the hype being generated around the film. He said: "It (India special trailer) is a very interesting move and they know how to do business. So it something amazing. You also feel very nice the way it is placed."

While Irrfan is all praise about the film and the marketing strategy, Vivek Krishnani, Managing Director, Sony Pictures Entertainment, India, hopes that the buzz reflects on the box office collections.

"We thought of coming out with a special trailer because a. India is to be perceived as a very important market for Hollywood and second because Irrfan plays a pivotal role in it...That also gives us the ability to release two weeks in advance. We are hoping combination of all these things gives us a huge box office," Krishnani said.

"Inferno" will release in Hindi, Tamil and Telugu along with English in more than 1000 screen in India. And Krishnani says they have planned a number of "specific activities in regional markets" so that the film establishes a connect with audience from around the country.