Be it Bengal or Maharashtra, the enthusiasm of the Bengali community is alike when it comes to celebrating the #Durga_Puja. And, it's no different even this time round. 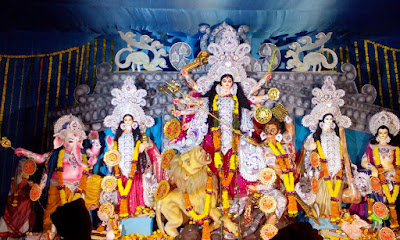 The community in Mumbai -- ranging from goldsmiths to businessmen to film stars -- is preparing with full festive zeal to welcome Goddess Durga as the much-awaited Puja starts from Friday.

The half-a-million-plus Bengalis, spread over Mumbai, Thane, Palghar and Raigad, will perform the Durga Puja at over 100 'Sarvajanin' (public) mandals during October 7-11.

While among the oldest Durga Puja will be held in a traditional manner by the goldsmiths and artisans in Kalbadevi, south Mumbai, the most visited venue will be Dadar Bengal Club's puja at Shivaji Park in Dadar West.
Then, there will be glamour touch to the lavish individual Durga Pujas organised by various Bengali Bollywood personalities in the western suburbs. These are thronged by Bengalis and non-Bengalis in large numbers during the four-day celebrations.

Playback singer Abhijeet Bhattacharya will hold his 21st celebrations at the Lokhandwala Sarvajanin Durgotsav Samiti, and former Bollywood actor Biswajeet Chatterjee, 80, will organise celebrations in Andheri, as per his decades-old practice. 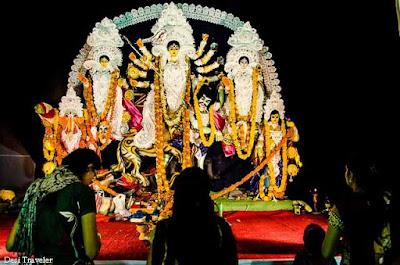 The famous Mukherjee family, comprising Tanuja, Kajol, Rani and others will also have their celebrations in the Tulip Star Hotel at Juhu.

"Wherever Bengalis go and settle, they start Durga Puja. In Mumbai, the celebrations are now over a century old and growing in terms of participation and opulence every year," according to Biplab Ghosh, President of Pragati Mandal, an association of the huge Bengali community in Palghar's Vasai town.

As always, the dazzling Durga Puja in Vasai is attended by Bengalis as well as non-Bengalis -- for the religious, cultural and culinary attractions, where four associations of Bengalis flourish.

"The various highlights -- based on themes including environment conservation, Swachha Bharat Mission, achievements of Indian athletes like P.V. Sindhu, Sakshi Malik and Deepa Karmakar at Rio 2016 Olympics , besides other cultural programmes and inviting specially-abled children from a nearby orphanage for the puja and Bhog -- would make the puja celebrations complete," Datta adds.

Elsewhere in Mumbai, there are attractions like the Ramakrishna Mission celebrations, where 'Kumari Puja' is held, or Sion, where IAF officers hold their own small celebrations, and the puja in Goregaon, which is managed by an all-women association, Ghosh explains.

Mumbaikars throng the marquees to admire the stunningly designed, decked and decorated idols of Goddess Durga, join the puja aartis and enjoy the vegetarian and non-vegetarian Bengali-style cuisines available in street-stalls format at different venues.

In its 17th year, Pragati in Vasai will recreate the Amar Jawan Jyoti monument in memory of the Indian soldiers martyred in various operations this year.

The New Bengal Club in Thane will have a marquee designed as a 'Babul Pakhir Basah' (or a weaver bird's nest), made of dry leaves, hay, peels of coconut, and date palm and betel-nut palm trees, to be designed by Nepal Biswal of West Bengal.

Other major venues for Durga Puja shall be at the Powai Bengali Welfare Association, who have created a replica of the Vivekananda Rock Memorial of Kanyakumari; and Bangur Nagar, the marquee at Goregaon, designed in a traditional 'daaker saaj' style inspired by Jamini Roy's paintings with a massive 14-feet-tall idol occupying the centre stage.

Kandivli suburb will have several pujas by various associations, including performances by singers and dancers at Thakur Village Bengali Association, a musical show by Bappi Lahiri at Kandivali Hilllside Residents Cultural & Welfare Association and performance by a Mahul folk band from West Bengal at the Maitree Cultural Association's Durga Puja in Malad.

In view of the extended spell of heavy rains across Mumbai and parts of Maharashtra, most organisers have taken precautions to waterproof their marquees and several are also fumigating the premises to drive off mosquitoes.