Debutant director #Katyayan_Shivpuri's film #Murga was adjudged the best film at the Swachh Bharat Short Film Festival #SBSFF and a cash prize of Rs 10 lakh awarded to it here on Sunday. 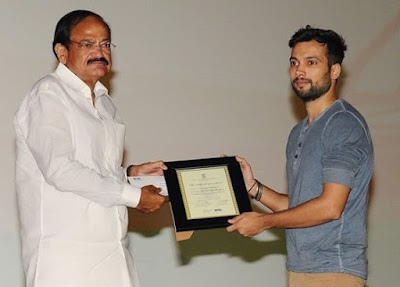 "I'm super happy, thanks to everyone who helped me make the film. We thought let's do something that's not preachy, we wanted to make it fun so, this whole idea of saying sorry and becoming a 'Murga' came in," Shivpuri said in a statement.

Commenting on the prize money, he said: "I'm going to first pay people who worked for free for the film."

Organised and curated by National Film Development Corporation (NFDC) on behalf of the Ministry of Information and Broadcasting, the festival is a cinematic presentation of short films of not more than three minutes' duration, dedicated to the Swachh Bharat Mission initiative.
The festival received 4,346 entries in more than 20 languages from across the country, including Jammu and Kashmir, Punjab, Uttar Pradesh, Telangana, Kerala and Tamil Nadu.

The Eastern and Western regions too participated in huge numbers with entries from Assam, West Bengal, Orissa, Gujarat and Maharashtra. There were almost 170 entries from Madhya Pradesh, including 30 from Indore alone.

The entries were received from all age groups including children as young as 10 years. Fourteen-year-old Sidharth Raj's "The Unsung Heroes of Swachh Bharat Mission" was among the top 20 selected films.

Bhandarkar, Pandey and Jagarlamudi were present at the function.

"Watching the films was like a feast. I am happy to attend the festival which aims at promoting Swachh Bharat mission through the powerful medium of cinema," said Union Information and Broadcasting Minister M. Venkaiah Naidu.