Veteran actress #Asha_Parekh, who turned 74 on Sunday, believes that she is still a child at heart and that she never lost her innocence. 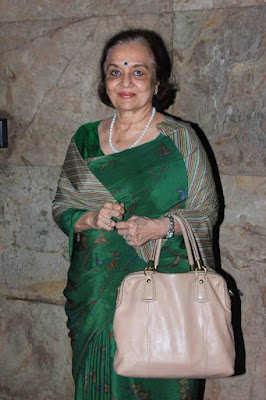 "I never lost my innocence, I think that's why the audience warmed up to me. I was always the friendly girl next-door. The tag of a successful star was actually a stamp of approval from the audience who loved me for being a normal girl just like the girls in every middle class family," she said.

Asha shared a healthy rapport with all her co-stars.

"They were all my favourites. I did the maximum number of films with Dharmendra, Joy Mukherjee, Jeetendra, Sunil Dutt, Rajesh Khanna and Shammi Kapoor whom I called Shammi Chacha. I played pranks on them.

"Once I hid Sunil Dutt saab's chappals in a chair during a shooting at a studio. He had to go home barefoot. Years later, they found the chappals hidden in the chair. Such was my rapport with my heroes that they all regarded me as their buddies, and not a potential girlfriend."

She worked with all the major male stars except Dilip Kumar.

"Some producer went and told Dilip Saab that I didn't want to work with him. Can you imagine any sane heroine saying that? I was dying to work with Dilip saab. But it never happened. But I did a film each with the other two superstars from the Dilip-Raj-Dev trio. With Dev Anand saab, I did 'Mahal' which was not so successful. With Raj Kapoor saab, I did 'Chor Mandali' which never got released."
Asha shared an equally healthy friendship with all her female contemporaries.

"Whether it was Sadhana, Vyjayanthimala-ji, Sharmila Tagore, Nanda, Waheeda Rehman or Mala Sinha... we were not the least threatened by one another's stardom. We all had our own place."

The friendship continues to this day.

"Waheeda, Helen and I continue to meet regularly. Sadly, our friend Nanda and Sadhana passed away. It was shock to all of us. We miss them terribly."

Looking back on her record-breaking run in the 1960s and 1970s, Asha said: "I do feel proud when I remember films were sold to distributors because of me. I don't think any other heroine of my times was considered lucky in the same way as I was."

Such was Asha's clout that she could dictate the leading man of her films.

"When I was doing 'Nadaan' I wanted Dharmendra to be cast opposite me as he was going through a low phase. Director Deven Verma had to request Dharmendra not to entertain my request because they had already committed to another hero."

Did all this power go to the actress' head?

The actress, who featured in as many as 20 silver and golden jubilee hits in the period between 1960s and 1970s, said: "I never thought of it as power. Films came to me, they were made and released. Many of them like 'Dil Deke Dekho', 'Teesri Manzil', and 'Mere Sanam' were memorable for me not because they were hits, but because we had so much fun shooting them. It was all a picnic."

But she got paid less than the male actors.

"It was wrong. But we actresses just accepted it as a male-dominated industry."

Now Asha is happy to see actresses coming into their own.

"I really like Deepika Padukone and Vidya Balan. And I loved Kangana Ranaut in 'Queen'. I hope these actresses are paid what they deserve."

Any plans of returning to the sets?

"There is nothing for me in today's films. I wouldn't have minded directing a film some years ago. I had directed a very successful serial 'Kora Kagaz'. But after that I just lost the energy to do anything more."

She confessed she misses a soul-mate in her life.

"I don't believe in sitting at home clinging to the past wiping photo frames with my tears... Please, there's so much more to do in life," she said.

The actress laughs at the memory of those days when she was nicknamed "Jubilee Parekh".

Her intimate association with filmmaker Nasir Husain yielded some of the biggest successes of the 1960s.

From the time Husain introduced Asha in "Dil Deke Dekho" in 1959 to their last film together, the mammoth musical blockbuster "Caravan" in 1971, the director-actress team was unbeatable.

"Nasir saab gave me some of my biggest hits. He also de-glamorized me in 'Baharon Ke Sapne'. Though the film didn't click -- no one wanted to see Asha Parekh with parched lips and hungry eyes -- the songs 'Aaja piya tohe pyar doon', 'Chunri sambhal gori' and 'Kya janoon sajan' are perennial favourites.

"Later I got a chance to prove myself as an actress in Shakti Samanta's 'Kati Patang' and Raj Khosla's 'Main Tulsi Tere Aangan Ki'."

"Yeah there were lots of successes with a whole lot of heroes. I really enjoyed working with Shammi Kapoor in 'Teesri Manzil' and 'Jawan Mohabbat'.