Veteran actress and politician #Hema_Malini who was here to launch the new TVC campaign of Kent RO said the ad reminds her of her double role in the 1972 film "Seeta Aur Geeta". 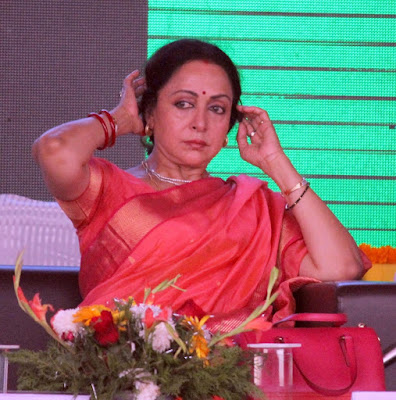 The brand launched its new innovation of air purifiers, and the actress -- who is also the brand ambassador -- emphasised the importance of clean air along with pure water.

The ad has Hema in a double role, with one clad in a pink sari and the other in a blue sari. While one talks about the water purifier offered by the brand so far, the other has the 67-year-old actress promoting the air purifier.

"This ad is very interesting, because it reminds me of 'Seeta aur Geeta'. The younger one is the one in pink and the elder one is the one in blue," Hema said here.
"This year's new campaign builds the focus to further drive the message that Kent RO offers a house of purity. The new campaign centred on the double role of brand ambassador with differentiated colour schemes, blue for water and pink for air," Mahesh Gupta, Chairman, Kent RO Systems Limited, said.