Superstar #Rajinikanth along with his daughter #Aishwarya_Dhanush visited Apollo Hospitals here on Sunday where Tamil Nadu Chief Minister J. Jayalalithaa is undergoing treatment, to enquire about her current health condition. 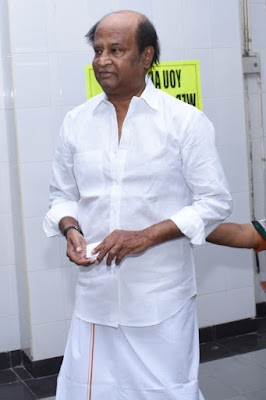 According to a source, the actor spent nearly 25 minutes in the premises.

"He (Rajinikanth) was not allowed to visit the CM's ward. He enquired about her health condition and prayed for her speedy recovery," the source told.

The 68-year-old politician was admitted to the Apollo Hospitals on September 22 for fever and dehydration.

In its last medical bulletin, which was released on October 10, it was revealed Jayalalithaa is making slow progress but did not say for how long she may have to stay in the hospital.
To stay updated, visit InstaMag or connect with us on Facebook, Twitter and Pinterest.