The five-day-long Rajasthan International Folk Festival (#RIFF) 2016 reached its peak with back-to-back performances by #Rajasthani_folk and international musicians, running till late night and stretching up to the wee hours with a dawn concert on the concluding day. 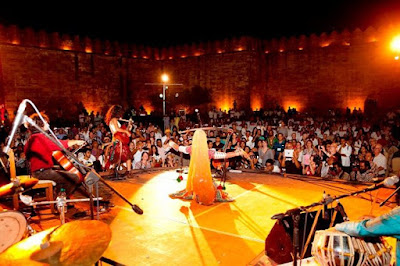 Smita Bellur opened the fourth day (Sunday) at Jodhpur RIFF with her spiritual vocals in Kannada, Hindi and Urdu. Her vocal performance in Hindustani and Carnatic music was uplifting and heart-warming for the listeners at the dawn concert.

A focused session on the aero-phonic instruments of Rajasthan was held in the afternoon featuring rare and fast disappearing instruments of Rajasthan which include the algoza, narh, murla, murli, been, and surnai among others.
Vijay Verma, former curator of Mehrangarh Fort, along with a number of artists demonstrated the instruments through their physical descriptions and performances as the audiences looked on amazed at the structure of some of these instruments and the different sounds they could produce.

The fourth day also featured Jayateerth Mevundi -- Hindustani classical vocalist of the Kirana Gharana -- performing at the magical Jaswant Thada. The listeners were enthralled by the fine mix of performances ranging from north Indian classical to Carnatic music.

Mevundi started off with a soulful bandish, 'Main magan madan matwaro' in raag Madhuvanti and followed it up with a dadrain Khamaj, an abhang in Marathi and 'beet gaye din bhajan bina' in Bhairavi.

The main stage opened with the experienced Anwar Khan presenting 'Dada dadi ke gaan' (songs of my grandmother and grandfather). He sang some of his favourites from the songs handed down from his grandparents to him -- and rarely heard today in the villages of the Manganiyar community themselves.

MaruTarang advanced the night with exquisite fusion of Indian folk and Australian roots, founded in the desert lands of Rajasthan. Australian artist Jeff Lang on guitar and Bobby Singh on tabla joined forces with two famous artists of Rajasthani music, Asin Langa on Sarangi, and Bhungar Manganiyar on Khartal. 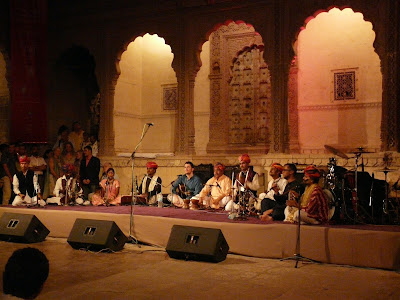 Sondorgo, band from the interiors of Hungary, kept the party going on the last night of Jodhpur RIFF. The played lesser known, traditional and popular tunes of the Serb-Croatian communities living along the Danube river. Strings of tambura instruments with rich and hypnotic sounds in perfect harmony, beckoned the audience to dance, clap, and kept them moving.

The last and much anticipated act of the five-day musical extravaganza RIFF Rustle was led by Ben Walsh, chosen as this year's rustler.

As twilight descended on the last day of Jodhpur RIFF, it was time to listen to Jaleen Kaur Monga -- and raag-based shabads, reet, jaap and folk from the holy Granth Sahib in her melodious voice carried across Jaswant Thada.